She is a friend, a kindred soul.

We both type to communicate, we both have other disabilities besides autism.

Sharisa Joy Kochmeister is only a few years older than me. 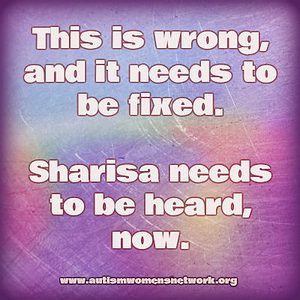 Image Description: text reads, “This is wrong and needs to be fixed. Sharisa needs to be heard now.” (Background is a mixture of pastel blue pink and purple blurring together framed in purple.)

Recently, she was admitted to a hospital because she was losing weight, unable to hold down any food (this is the information shared in social media).

A series of events, including accusations of abuse and Munchausen by Proxy, led the state of Colorado to declare Sharisa incompetent, stripping her of all her civil rights. I want to add that her human rights are also being violated.

I will not go into details about the accusations because first, I don’t know the details and second, Sharisa’s rights were violated independently of what might or might not have happened to her.

When Sharisa was declared incompetent, it was because – according to information given by the state agency in charge of her case – she couldn’t communicate. Never mind that there is no evidence that the social workers ever tried to understand her method of communication.

Let me explain. I am not talking for Sharisa but since we need similar accommodations and supports to be able to communicate in a way that the majority understands, I will give my input.

Sharisa can type independently. Even if she is not typing independently all the time, her ability to express herself is indisputable, based on film, school records and several public appearances. I can say this: I would have a very hard time typing anything to satisfy people’s idea of competency, especially if I had been denied the right to be with, or see people I trust and love.

I would not be able to type to satisfy people who believe I should simply get over a stressful situation, to get over a sick body, just to validate their assumptions that if I wanted to, I could force my brain to re-wire itself to conform with a neurotypical way of processing thoughts and emotions.

There is a much bigger problem in this situation and it shows the extent of her rights being disrespected.

The state decided, after Sharisa “refused to communicate”, that her IQ was too low for her to be seen as competent.

This is outrageous. Records show that this is inaccurate. The bigger problem is, since when is it ok for social workers to decide that there is an arbitrary number that gives disabled people human rights?

Low IQ is not an excuse to strip people from their personhood.

One more thing: wasn’t Sharisa exercising self-determination when she refused to communicate with people who were, in effect, oppressing her? (anyone who demands another person to either comply or lose their rights is an oppressor).

Sharisa was kept in a hospital, sent to a nursing home, and is now in some “host home”, without any contact with people she knows, and who know her. Reportedly, there was one supervised visit with her father but the fact that she was then able to type and state her feelings was ignored.

Worse, she is still being denied a voice. She is still being denied an interpreter, someone familiar with her method of communication, someone unbiased. Sharisa needs to have access to such interpreter. She does understand how important it is for her to say what she wants to say, whatever this is. Her words matter and she can exercise her self-determination in a way that is beneficial to her, and no one else.

It has also been reported that Colorado stated that there was no money for such an interpreter. After weeks in a hospital, and a nursing home, after the money used to assure her rights were being violated, all of a sudden there is no money to give her the right to her own voice? That is not acceptable.

How many rights violations can you count in the previous paragraph?

I don’t, at this moment, care about accusations and justifications. I care about how Sharisa’s rights were violated so that the state could make a case against other people.

This is wrong, and it needs to be fixed.

Sharisa needs to be heard, now.

← Why I #BoycottAutismSpeaksWhat Does Autism Speaks “Call For Unity” Mean? →