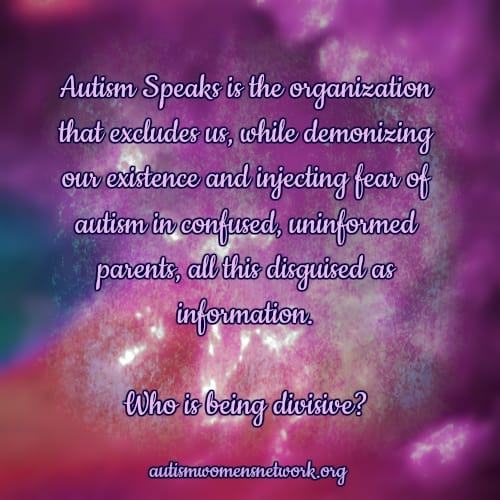 In very few words: crisis management.
But this is an informative post, so I will give the information. 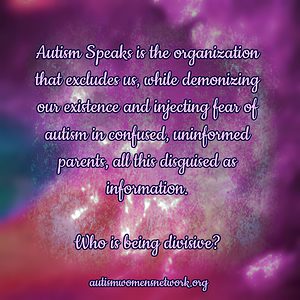 IMAGE DESCRIPTION (text reads) “Autism Speaks is the organization that excludes us, while demonizing our existence and injecting fear of autism in confused, uninformed parents, all this disguised as information. Who is being divisive?” awnnetwork.org. The background is a mix of purple pink and blue that blends together.

The book is getting a lot of press and good reviews. Steve Silberman is very respectful of our voices and reminds journalists that they should talk to us, listen to what we have to say about our own neurology. He reminds the media that what we think is important.

One of the points he made in one of the interviews (and in the book), is that we, Autistics, don’t like how Autism Speaks talks about us, without us. This is not news. Autistics have been protesting Autism Speaks since its foundation. It should not surprise anyone that we have a problem with an organization that never uses positive words when referring to us – and this is to say the least.

Some of us, including me, even started the grassroots movement Boycott Autism Speaks.

All this time we have been protesting, and Autism Speaks leadership never addressed our concerns, ignoring us, using stereotypes to hurt us. It blocked us from the organization’s social media pages.

But this time, Autism Speaks leadership responded. Not to us, Autistics, but to a non-autistic writer who is getting a lot of press, and who supports our goals, who listens to our voices. But he is not Autistic.

Liz Feld, President of Autism Speaks, wrote a “Call for Unity”, another shallow defense of the organization’s methods, saying that Steve Silberman (and Autistic adults, by proxy) was “dividing” the so-called autism community.

Autism Speaks is the organization that excludes us, while demonizing our existence and injecting fear of autism in confused, uninformed parents, all this disguised as information. Who is being divisive?

Different opinions are not necessarily bad. Silencing, using the privileges of money and control of the media is (Autism Speaks founders – Bob And Suzanne Wright – are rich and well connected in the world of television, entertainment and marketing).

So, what is this whole “unity” talk, since the last thing Autism Speaks wants is our participation, our voices in the conversation about us?

As my friend and journalist David Perry pointed out: Autism Speaks’ call for unity is a thinly-veiled attempt to protect their brand for fundraising purposes, now that long-standing criticisms of them from within the autistic community are spreading more widely.

If we are “allowed” to be part of the big decisions about things that affect our lives, the general public will see that we don’t wake up everyday and think we are “lost tragedies burdening our families”.

The public might support our fight for inclusion, supports, respite care for parents, access to education and jobs, equal opportunity.

The general public might finally get the truth about who we are and how we deal with very real issues. Autism is a disability and it can be, without supports, impairing. We are speaking up and fighting for supports for ALL Autistics.

Reminder: I am the “poster child” for what Autism Speaks calls “tragic”. I could not always type my thoughts either.

Yet, here I am, protesting and speaking up. Not suffering, not broken. With supports I have a rich, exciting life, an interdependent life, and I make my own decisions.

If Autism Speaks wants unity, it needs to own up to its motto: time to listen.

There is no possibility for “unity” if Autism Speaks only talks and never listens to us.

Our goals are for Autistics (plural) participating in every decision involving autism. Autism Speaks goal is for one token Autistic to write something from time to time, even if it is a plagiarized piece of Autistic activists who very loudly protest the organization.

Want unity Autism Speaks? Listen to what we have to say. That’s a start.