Thank you to “Raven’s Wing Poetry” for giving Autism Women’s Network permission to republish this powerful piece about Reginald (Neli) Latson, and the injustice he has endured. Original post published at The Digital Hyperlexic. 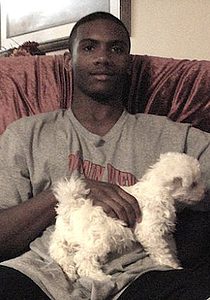 Cases like that of Reginald “Neli” Latson worry me. No, scratch that — they frighten me.

Latson’s hell began on the morning of May 24, 2010. He was waiting for the public library to open in Stafford County, Virginia. Latson evidently was wearing a hoodie, which was enough for someone to call the local police and report him as a “suspicious character”.

According to the San Francisco Bay View, here is what happened next:

“Deputy Calverley [the officer who answered the call] then approached Latson and searched him for a gun. No gun was found. Calverly asked Latson for his name, and Latson refused and tried to walk away as he had committed no crime. Calverly then grabbed Latson and attempted to arrest him without reading him his Miranda Rights or calling for backup.”

Since then, Latson has been imprisoned without just cause. The Autistic Self Advocacy Network (ASAN) states that after serving two years resulting from the charge of assaulting a police officer, Latson “had another unfortunate encounter with police in which he threatened suicide”. Multiple sources report that after this incident, he has been in solitary confinement for the last year. The Arc of Virginia quotes a statement by Latson’s lawyers which appeared in a Washington Post article that “in effect Neli spends 24 hours a day locked in a segregation cell with minimal human contact for the ‘crime’ of being autistic”.

ASAN further elaborates on the damage Latson has suffered while in confinement:

“Isolating vulnerable prisoners in solitary confinement is a violation of human rights. Solitary confinement is particularly pernicious and potentially counterproductive for those with disability-related behavioral difficulties. Neli has lost coping skills while in isolation, and remains at continued threat of further adverse psychological impact. Yet instead of providing him with appropriate supports and a meaningful transition plan, the system continues to fail him.”

#BlackLivesMatter includes black autistic lives. Mine. Those of the autistic sons of black women who do not sleep easy at night. The socially awkward black geek girl bullied by her classmates. The self-identified-autistic transman navigating his way in a hostile world. My father, if he were still here. And Neli Latson.

In and amongst our mourning and righteous indignation over the deaths of Michael Brown, Eric Garner, Renisha McBride, and others, we need that same kind of fury for Neli — until he is free.

Also consider: this is where racism and ableism endangers us. Autistics, especially those who have undergone some sort of Applied Behavioral Analysis, are taught conformity and compliance. While this is unhealthy for any autistic, consider how exponentially dangerous this is for a black autistic individual. Kerima Cervik on the Intersected blog said it much better than I ever could:

This disaster is the intersection of autism, ableism and racism colliding with the school to prison pipeline. See everyone who is poor in Black America prepares their son for that moment. They teach them the social cues and red flags. They tell them to have a way to make that phone call and an understanding that they will be harassed by police at some point. But autism parents are told they need to teach compliance and concrete ideas about police to their autistic children. It gives autism parents a false sense of security about their teens encountering police.

To black people: Neli needs us, y’all. He needs people to know his name and his plight. He needs us to speak up for him in anyway we possibly can. Hey #BlackPoetsSpeakOut — he needs our poetry decrying his unjust imprisonment along with the murders of black people (don’t be content to wait for me as a black autistic poet to say something first). He needs our sincerely belief that #BlackLivesMatter means him and every other black autistic person, too. And he needs that belief put into action.

To the wider autistic community: Neli needs your voices. With the same outrage with which you decry ableism, stereotypes, ABA, Autism Speaks’ horrific #MSSNG campaign, confinement and restraint, underemployment, discrimination, abusive medical treatments, and so forth…talk about Neli. Tell his story. Tell Autism Speaks that he is #NotMssing either. He needs your righteous indignation put into action as well.

Want to do something about this? A good start, courtesy of The Arc of Virginia, would be to contact Virginia Governor Terry McAullife at 804-786-2211, by email form at this link:https://governor.virginia.gov/constituent-services/communicating-with-the-governors-office/ or on Twitter at @GovernorVA. You can also retweet this article, and many other articles about this case — using the hashtag #FreeNeli. Share this on Facebook, Google +, or other social media. Write a poem. Blog about it. Send missives to your local newspapers. Tell your friends about this, word of mouth, until his case is known far and wide.

Neli deserves nothing less from us.