I have to cite the hateful Op-Ed Autism Speaks’ co-founder Suzanne Wright wrote a coupe of months ago. It took me a while to process one of the many discussions I was part of and I was so tired after the whole thing, I did not talk much about it. Until now, I thought I was going to try to forget about this discussion. I can’t.

This is even more disturbing and disheartening.

One parent even said that her children were a “life long tragedy”. 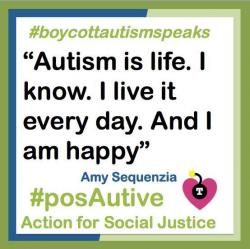 I was the only one showing outrage for the Op-Ed (later a couple of parents also indicated they were outraged, but they did not engage in the discussion). I said that I am the Autistic Autism Speaks considers “tragic” and “burden”, and that the hateful rhetoric hurts and even endangers us. I said that several times and each time parents still said “some” Autistics were, indeed, burdens on their families and that the ones who were offended were the “high-functioning” ones. No surprise there. This is the go-to excuse to silence us, even though I had just stated that I am what Autism Speaks calls “severely affected”. It was silencing and ignoring at the same time. I was asking them to consider my feelings and they were doubling down on their support for Suzanne Wright and all the hatred. Some parents and a “doctor” tried to give Ms. Wright some legitimacy, saying that she was absolutely not trying to hurt people, she was just trying to raise awareness of how inadequate the supports are and how the government is not doing anything to help the “tragic spread of autism”. They said that she was a grandmother of an autistic child, therefore she could say whatever she was saying because her words were coming from a place of “love”.

But how can it be love when the whole Op-Ed was fear, lies and hatred? The “doctor” tried to convince me of “all the good” Autism Speaks does. But his condescension did not hold up against facts.

I know that sometimes people refuse to hear and see the truth. They are comfortable in their roles, usually a role that puts them in a position of perceived superiority, at the same time of saviors and martyrs. But when autistics of all ages are being demonized by an organization that asks parents and friends for their support, I will speak up. What it is more appalling is that some people don’t even realize that the main mission of Autism Speaks is to eradicate the group of people it claims it wants to help.

Parents who accept those words written by Suzanne Wright as the truth, see themselves as victims and martyrs. They may love their children, but they are selfish. They are not thinking about a better future for their children. If they are, they should realize that their actions guarantee a very difficult life for the autistics they love.

I also know parents of disabled children that are not Autistic. They have the same worries all parents have. It is true that parents of disabled children have a perceived (because life is unpredictable) extra worry, since some disable people will need more extensive supports all their lives. I am a disabled/autistic who will always need another person to help me with my daily everything. I do worry about what might happen in the future, if I cannot count on the people and supports I have today. I will talk about this in a moment. What I wanted to say is that it is very sad to see that some parents of Autistic children are so quick to defend Suzanne Wright’s hateful words as if fear and demonization of who we are is what is needed to guarantee a safe and happy future for us. Clearly, it is not. Besides, I never heard of parents of children with other disabilities defend someone who talks about their children the way autistics are talked about by Autism Speaks and the Wrights.

As I said, I worry about my future. At the moment, I have a rich and fulfilling life. I have awesome people helping me be the best I can be, and this is why it is possible for me to be a full time activist. I have a plan, though, in case things change. And part of this plan is my fight for acceptance of all Autistics. If I am accepted as I am, I will continue to be respected and valued, I will continue to receive the supports I need to be an activist and help in the fight for acceptance. It is a cycle. An important part of this plan is my community. They know me, they know what I fight for and I count on them to stand with me when I need them.

To parents who say that my plan does not address the “independence” everyone wants as an adult, I can only say that I am as independent as my reality allows. And this means that physically, I cannot be “independent”, but I have an independent mind (like Stephen Hawking). And this does not have to change in the future, if I am accepted in the same way I am now. I don’t’ run away from my reality and the reality is: I need a lot of help. But I am not a tragedy and I am sure my family and friends don’t think I am a burden. That’s because they see my value. Wouldn’t it be great if all the disabled were valued, no matter how much help they need? That would mean that “help” would not be a dirty word. It would be just part of life, like a disability is a natural part of the human experience.

I believe parents and the ones closest to disabled people should be the first ones to accept and fight for that vision, right beside us.

The opposite seems to happen with some parents of autistic children. They believe that it is important to sound an alarmist tone because they are concerned about their children’s future. They not only accept the dismissive and demonizing words direct at their children, they actively support such speech, repeating and amplifying the hatred. They work against acceptance, they say their children have too many deficits to succeed, they say this is because they want to make sure their children are “well taken care of” and happy, when they are no longer alive.

How, I ask, is this going to happen? If parents do not accept their children and talk about them as if they are a bag of deficits and difficult to “care for”, why would other people accept the autistic person? Who want an extra “burden” that makes people’s lives “miserable”? These parents are in denial. Their children might even find someone who will “take care” of them, feed and keep them company. But they will be pitied. They will also be ignored and silenced. They will not be independent, not in the way independence really matters.

If you support and believe in Autism Speaks and Suzanne Wright’s rhetoric, if you think the best outcome will be through alarmist speeches, if you think that a “autistic city” will keep your child safe when you are gone, you are jeopardizing everything you say you want for your child.

You are telling the world that your child is great but also a burden, that your child deserves a good life but a segregated one with little chance for self-determination.

You are asking others to pity, to beware of and to begrudge your child, while praising your efforts to make sure he has a life nobody would choose for themselves.

About the author, Amy Sequenzia.