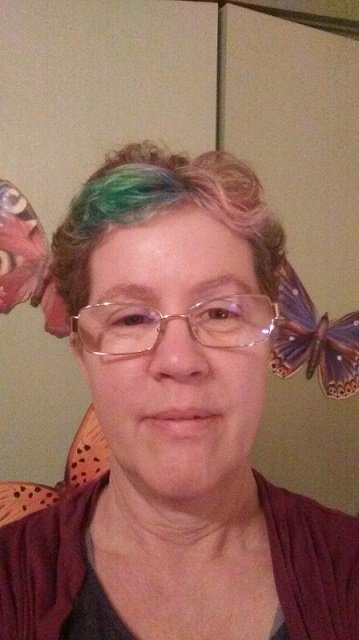 Why did you create Autism Acceptance Day?

I created Autism Acceptance Day because I saw the need for a model of autism that Autistic people could embrace; something that would not make us feel bad about ourselves, like the “missing piece,” “devastating disorder,” and other then-popular and, sadly, still-popular characterizations of autism. The impetus or start of the idea came when I was thinking about someone I know who was walking across their college campus and saw a display of 150 empty strollers, which was supposed to symbolize “stolen children,” and at that time the rate of autism was 1 in 150 people.

Every April, Autistics and many of our family and friends were swamped with messages about how damaged we were, how lacking, how flawed, how we had no empathy, how we were dangerous, even. That sort of rhetoric continues to this day, but we have a growing body of work, including writing, art and images, and events, that not only counter those negative messages, but also give us something positive to look forward to. So many organizations and people have become involved. It is way beyond anything I could do on my own.

The idea of autism acceptance goes way back. Estee Klar started The Autism Acceptance Project (TAAProject) in 2006, featuring the work of Autistic artists. Autistic people and some of our families and friends and supporters have always talked about acceptance, but 2011 was the first time a dedicated event focused away from typical “awareness” was started. I created a Facebook event, a lot of people (over 1000) joined in almost immediately. The first logo was created by Amy Gould Caraballo and Steve Summers. (Later, Landon Bryce designed our current logo.) Disability Scoop wrote an article called “Not Everyone on Board with Autism ‘Awareness’,” and AWN did BlogTalk Radio interviews with me in 2011 and 2012. One of the first people to create an Autism Acceptance Month event was Samantha Bodwell, who was on the Board of the Autism Society of Northern Virginia. She changed their annual walk from “autism awareness” to autism acceptance, and they have been holding an annual Autism Acceptance Walk ever since 2011. In 2012, Steve Silberman wrote a widely read article that featured interviews with Autistic people and parents who were on board with autism acceptance. The Autistic Self Advocacy Network created the Autism Acceptance Month website. The Autism Positivity Flash Blog was started. The Thinking Person’s Guide to Autism started featuring interviews and specific focuses each Autism Acceptance Month. Due to the blue lightbulb phenomenon, a number of counter-initiatives such as Walk in Red (now Red Instead) and Light It Up Gold, and Tone It Down Taupe, were created and have been in existence for a number of years now. I need not leave out Light It Up Rainbow!

Have you noticed any changes in the media or in people’s general perceptions about autism or autistic people since the event started 7 years ago?

Autism Acceptance Day and Month are in their 7th year! This year, every once in while as I go about my day, I stop and think “Wait! Seven years!” I wonder what Autism Acceptance Month will be like in another seven years. I think the most important thing is a change in language that is used, especially in April. Visual images and quotes from each of the initiatives I mentioned above have made quite an impact and given people other rhetoric to use instead of the “devastating disorder” tropes we always used to hear. Recently my son, Coby Westby, talking about the language certain politicians use, remarked, “It’s like making an autism metaphor and then using that to try to cure autism. It’s not going to happen.”

In the mainstream media, there have been some April features on autism acceptance. While not always positive in tone, sometimes bad press is good press. It means the idea is out there and people are considering it, even if they really want to get rid of it or dismiss it. We are not going away. In 2016, Apple featured an April video about a young man who uses his iPad to communicate, and tagged it with “acceptance.” I think the tide is turning toward considering us as human beings in our own unique ways rather than some project that has to be “fixed” using coercive therapies and attempts to normalize us. OK, do this right now! Do a search on “autism acceptance images” and see how many different ones there are! I counted over 50 before I stopped. There are a few that veer off into areas I don’t particularly like, but this is quite different than 2011, when you would be hard-pressed to find more than a few images that had “autism” and “acceptance” in the same picture.

Depending on which words I use to do searches on autism acceptance, I find more and more posts, thoughtful articles, and normalization of the idea of acceptance of Autistics as we are, pushing against and in some cases pushing out more “traditional” ideas that we are the ones who need to conform precisely to non-autistic standards. I think we might be on the edge of a paradigm shift.

I think more parents are learning earlier on in their children’s lives that autism is not some sort of death sentence, contrary to what rather prominent “experts” and media personalities say. Learning that it is OK to accept their children is going to make a huge difference in the lives of those young Autistic people. I have started seeing some positive impact on younger Autistic people, who grew up in the era of negative television ads. It makes me really sad to think of some of the awful ads of a few years ago and the impact they have on Autistic young people. One of the interviews I did this year on the Autism Acceptance Day blog addresses that issue.

One of the most important things I do with Autism Acceptance Day and Month are interviews with Autistic people, about what their lives are like, what acceptance of autism means to them, and what impact Autism Acceptance Day and Month have had on them. The interviews are really interesting and I feel honored to be able to interview these people. It really is an amazing feeling to me to be able to record these pieces of people’s lives that they want to share with others. The interviews are at http://autismacceptanceday.blogspot.com/

What further changes would you like to see as Autism Acceptance Decade continues to move ahead?

One of the huge determinants of the success of any movement is the number of people other than those who started the idea who are interested in carrying it on and taking it in new directions. In the past year and a half, I have had a number of life and family situations that have forced me to cut down the number of hours I spend (it used to be hundreds!) promoting Autism Acceptance Day and Month. Although I always plan to be involved, and am now thinking about focusing ahead to 2020, so that we can have some huge sort of “end of one decade, beginning of the rest of Autistic history!” sort of initiative, I also am happy to see that even if I drop out of sight, Autism Acceptance Day and Month are always going to “be a thing.”

Acceptance can have impact on so many areas. Meaningful services and supports are key, even in this conservative political climate where so many budget cuts are being made: “balancing the budget” on the backs of people with disabilities and slashing funding for the most vulnerable people in the most vulnerable areas of our lives. Housing initiatives that once again segregate disabled people away from society are something concerning that I am trying to keep an eye on. It’s not “intentional community” unless you can come and go at will, no matter what the developers call it. Health care for Autistic and disabled people that is geared toward real access to providers in ways that are understandable for us. So many things need to be addressed, that go way beyond the scope of Autism Acceptance Day and yet are core areas that will benefit from the concept of real acceptance of Autistic people.

3 thoughts on “Interview with Paula Durbin-Westby”