I already wrote about how I type, and how hard it can be to make my finger respond to my brain and hit the letter I see in my head.

That’s how it works: 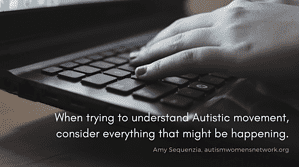 When I want to type something, first I see that in my head. Then I have to make my brain tell my finger to point to the first letter of the first word I see. It is a slow process and it requires focus. Sometimes the arm does not react to the commands of the brain, or the finger doesn’t point straight enough to be able to type. When I type the first letter, the process repeats for the second letter, the third, and to all the letters of all the words of whatever I want to say.

That’s one reason why I don’t engage in a lot of conversations, and the reason why I don’t do “small type” (small talk for typists). Typing is not easy and it doesn’t get easier as the words come out. It is as hard at the end as it is at the beginning.

Because of the many factors that interfere with my typing, sometimes I type faster and for longer, sometimes I need more breaks. But it is always exhausting.

I want to talk about movement and the neurodivergent brain, and I want to tell you what happened to me today (and this happens sometimes) after I had a seizure.

Some people believe that a seizure can be considered bad only if it causes falls, convulsions, and stops a person’s breathing. This is not true. What happens in my brain doesn’t always match what people see.

During seizures, I am not conscious but I know how they look like because I asked my friends. I have seizures that may look harmless, like a startle and a slow drop of my head, but it can take me a very long time to recovery after them. I might need a lot of time to be able to sit up, or I might not be able to go out or to sleep as a result.

Sometimes I have seizures that might look really intense, and my friends expect me to spend the whole day in bed, resting, but I recover in just a couple of hours, sometimes in a few minutes.

Today, I had one of the seizures that look harmless. I wasn’t conscious but my friend said it didn’t look like a very intense seizure. I was lying down, then my eyes rolled up, my body got stiff for less than a minute, and soon I was “back”. But my brain felt it differently. First, my body got disoriented. It felt like all my bones and muscles wanted to move in every direction at the same time.

Then, l became lethargic. I couldn’t move. I couldn’t do anything to help my friends as they tried to put me in a more comfortable position on the couch.
So I just lay there.

After a while, I was ready to get up. But I could not walk. My legs would not move, so I had to sit down again.

A couple of hours later, when I was having lunch, my body forgot how to hold a fork. It took me a few minutes to “remember” how to hold it, and what to do with it. After that, as I was beginning to type this post, I felt that it was very easy. I typed with very little support, and for a little while with no support at all, for a few minutes. Then my arm stopped moving. I typed for a while with some extra support because my arms felt very heavy and I had to focus harder, which made me very tired.

I have to take a few breaks and finish this post two days after the seizure. I did type other things, comments on Facebook posts or short conversations at home. But those were enough to make me very tired and unable to finish this post earlier than I wanted.

I am telling this story because I want people to remember that autism and movement are related, and that even though what happened to me was related to a seizure, I have experienced similar things without seizures being involved.

So, when trying to understand Autistic movement, consider everything that might be happening.
Maybe it is the common co-occurring epilepsy, pre-seizure or post-seizure.
Maybe it is simply the many turns and loops of a neurodivergent brain trying to make the body do what it wants.

There are many ways to do things. Respecting how we move, not only the need for movement in the form of stimming, but the supposedly simple and easy-to-perform movements, is part of respecting who we are.