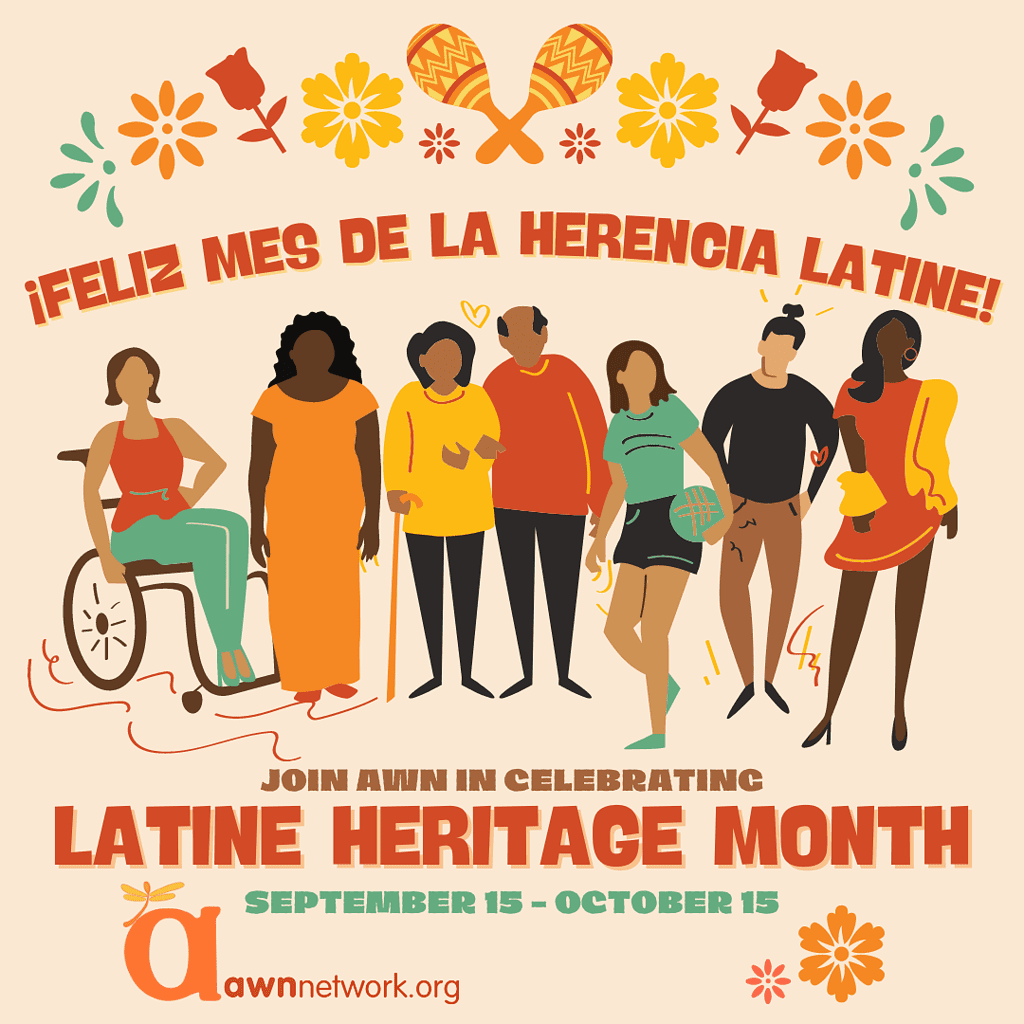 Hola, I’m Kayla Rodriguez. I’m an Advisory Board Member of the Autistic Women and Non-Binary Network (AWN), and a proud Puerto Rican autistic lesbian. I want to wish all of my fellow Latine people a Happy Latine Heritage Month! I love being in community with other autistic, disabled, and Latine people. However, these communities aren’t perfect. I have witnessed racism and lack of representation of Black Indigenous, and People of Color (BIPOC) within the autistic and disability communities, among other problems. I also have witnessed lack of understanding and acceptance of autistic people like me within the Latine community. I wrote a blog post about these topics one year ago, and much of what I described in last year’s post hasn’t changed or improved.

Since writing about my heritage last year, I have stopped using the term “Latinx” and now use “Latine.” The reason is because “Latinx” has no official Spanish translation and does not conjugate in Spanish, and Latinx is controversial in parts of my community. For these reasons, “Latine” is now increasingly being used as another gender-neutral alternative to “Latino.” There are several things I want to talk about this year, including racism and media representation of Latines.

Like I said last year, there is still a lack of knowledge on autism in Latin American countries and Latine communities within the United States. Related to this, there is less information about autism available in Spanish. There is also a lack of Spanish-language screening tools for autism and cultural/language training for doctors who screen Latine people for autism. Due to these factors, autistic Latine and Hispanic people go undiagnosed at much higher rates than white people. Those autistic Latine children who receive a diagnosis are diagnosed on average 2.5 years later than white non-Latine children. This lack of diagnoses leads to a lack of support systems for them. And it increases the discrimination they already face.

Racism within the Autistic Community

However, I’ve also noticed that some Latine autistics aren’t standing up for other BIPoC experiencing racism. Academic research published in August 2020 by Álvaro J. Corral showed that anti-Black sentiment is prevalent within the Latine community, including against Afro-Latines, which often prevents solidarity with #BlackLivesMatter. Also, as reported by NPR many Latines did not support the recent protests against anti-AAPI violence  studies have shown that there are issues of anti-AAPI bias in Latine communities. Yes, some within the Latine community comment on the racism and exclusion in society and they should. But from what I’ve seen, not everyone comments and helps support other BIPoC that are being harmed because of racism. As argued in an , article in Latino Rebels some Latine people are often complicit with white supremacy too. Just look at the controversy that In The Heights received for not representing Afro-Latines.

Latine Media Representation and In the Heights

I am a Puerto Rican that was born and lived in Mount Vernon, New York, which isn’t far from New York City, for the first 8 years of my life. I want to see the movie In the Heights because I heard it’s good and I can relate to its setting of Puerto Ricans in New York City. I do respect that Lin Manuel Miranda, creator of the original play and best known for “Hamilton”, has been working to represent Puerto Rican and Latine culture.

However, I have two concerns. First, it seems like he is the only highly visible celebrity representing my community these days and we should have more representation. In The Heights isn’t the only movie musical he is a part of this year. He was also involved in the animated musicals Vivo, which is on Netflix, and Encanto, which comes out this Thanksgiving.

Second, Lin Manuel Miranda also had his own problems for his political stances on Puerto Rico and how he treated Puerto Rico after Hurricane Maria. Miranda has received criticism for his past support of unpopular austerity measures imposed by the U.S. government in 2016 on Puerto Rico because of debt. These federal austerity measures, known as PROMESA, have led to hundreds of school closures, along with tuition hikes and budget cuts at University of Puerto Rico.

If you want to learn more about Puerto Rico’s current struggles, check out the La Brega podcast in English and Spanish. These issues disproportionately affect disabled Puerto Ricans, as disability justice activist Bianca Laureano explored in her recent performance with Sins Invalid about her experiences as an Afro-Latine disabled Puerto Rican.

Miranda has also been criticized for not doing enough to support Hurricane relief efforts. Yes, he has helped raise money for arts organizations in Puerto Rico. When paper towels were being thrown at the crowd and Puerto Ricans were basically being told to clean the mess themselves and not help at all, Miranda didn’t help as much as he could’ve. And since then, Miranda has been criticized for seeming to support politicians many Puerto Ricans had protested because of bigotry and corruption. Here’s an article explaining the situation.

Third, the neighborhood of Washington Heights in New York City, where “In The Heights” is set, is mostly made up of Afro-Puerto Ricans and Afro-Latine people. In the film, most of the major characters aren’t from those groups. I believe that because there are so few good representations of the Latine and Hispanic community, it’s important to get it right, which the film fails too. Afro-Latine and Afro-Hispanic people are rarely seen in the media, and that needs to change.

Representation for Latine and Hispanic people is still poor, despite the fact that we are one of the fastest growing communities in the US. According to this article from the Los Angeles Times, only 5.3% of television roles in 2018-2019 roles and 4.9% of movie roles in 2019 were Latine and Hispanic. And the representation we do have is still poor. Hollywood still casts Latine actors in roles that reinforce harmful stereotypes, such as men being cast as “thugs” and women being cast as the “spicy Latina.”

I’m tired of the “Spicy Latina” stereotype and seeing actresses like J-Lo typically being cast in that role. Not every Latina is like what J-Lo is usually cast or Gloria (Sofía Vergara) from Modern Family.

Also, as I pointed out one year ago, there’s still no Latine autistic representation in Hollywood that I know of and I really hope that changes someday. People like me, Victoria M. Rodríguez-Roldán, J.D., and Kayley Margarite Whalen exist and we deserve to be seen on screen. Correct representation leads to acceptance and society in society.

I watched the 1961 version of West Side Story and liked it though a lot of the Puerto Rican characters, including the lead protagonist Maria, were portrayed by white actors. This was common for its time for white actors to play BIPOC characters. 60 years later, the upcoming remake of West Side Story is coming out this Christmas and they did cast more Puerto Rican and Latine actors as the “Sharks” (the Puerto Rican gang inspired by the Capulets from Romeo and Juliet). While unlike the 1961 version they did cast a Latina in the role of Maria, Rachel Zegler, she is still not Puerto Rican! Some other members of the Sharks are played by actors who also aren’t Puerto Rican, but from other Latine and Hisapnic backgrounds. I hate this because Hollywood just cast someone who is Latine without casting specifically for where the character is from.

Also, I’m dissapointed in the casting of Ansel Elgort in the lead male role because of the sexual assault allegations against him dating back to 2014, which only became public after the movie was filmed.

I do appreciate and respect Rita Moreno, who starred in the 1961 version of West Side Story and will appear in the 2021 version, because she was one the first examples of Puerto Rican, Latine and Hispanic representation in Hollywood. However, she initially defended the colorism of “In The Heights, although she did apologize later on. I still want to see it and I hope Steven Spielberg delivers on this one.

In my Latine Heritage post from one year ago, I described my struggles learning Spanish. Since then, I’ve learned a bit more Spanish in the past year. For example, I learned that the Spanish word for autism is autismo. I learned more Spanish because of the language app Duolingo, LeJuan James on Instagram, and my new special interest: the groundbreaking relationship between Juliana Valdes and Valentina Carajval, commonly known as Juliantina, from the Mexican telenovela Amar a Muerte.

I discovered Juliantina while recovering from autistic burnout (here is a resource from AWN on autistic burnout). As a lesbian, Juliana and Valentina made me love being part of the Latine community, even though they’re from Mexico and I’m Puerto Rican. Watching Juliantina taught me more Spanish and made me love the language. It was only the second Spanish-language lesbian love story I’ve ever seen, and had a huge impact on me.

The Juliantina fandom is mostly made of queer Latine people. Being part of the Juliantina fandom makes me feel like I’m around people who share some things in common with me. Like I’m with people that share some of my identities and culture, even know these people are from Mexico and I’m Puerto Rican. I said last year that I barely knew any Latine autistics aside from women involved in AWN, including Victoria Rodriguez-Roldan and Kayley Margarite Whalen. That is still true, but I also barely know any queer Latine people (aside from Victoria and Kayley and others involved in AWN), probably due to a lot of them being closeted because of the rampant homophobia in Mexico, Puerto Rico, and other Latine and Hispanic countries. I plan on writing more in a future blog about Juliantina, but safe to say, the couple has helped me a lot during this pandemic.

While joining the Juliantina fandom, and following LeJuan James on social media, has helped teach me a bit more Spanish, it is still very hard for me to learn it. I tried Duolingo, but the knowledge and vocabulary went one ear and out the other. Also, I keep forgetting to keep doing Duolingo and practicing the vocabulary, even though I’ve written all that I learned so far down on paper. I still have to try though, because to me, it’s an important part of embracing my heritage.