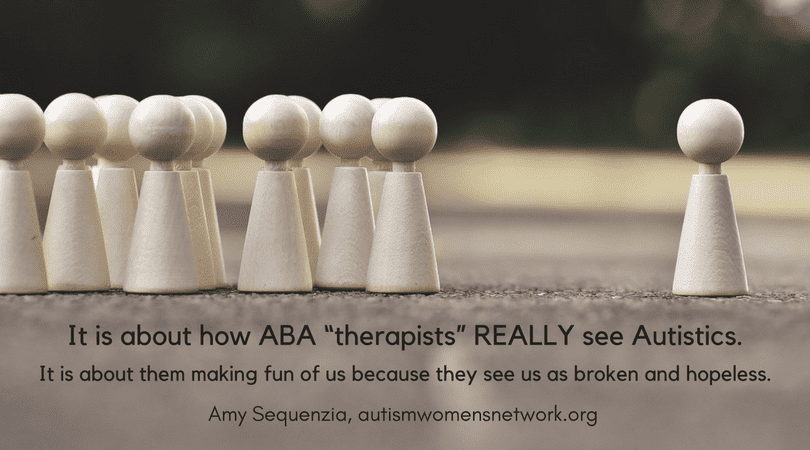 I have already written about my thoughts on ABA. I do believe it is dehumanizing, and is used to make Autistics act in a way that pleases non-autistic people. 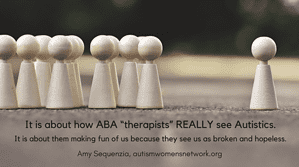 Image is a photo of a group of human figure-shaped wooden pegs clustered to the left and a single wooden peg standing off to the right. Text says, “It is about how ABA “therapists” REALLY see Autistics. It is about them making fun of us because they see us as broken and hopeless. -Amy Sequenzia, awnnetwork.org”

Many will say that ABA teaches “life skills”. I say that, if you are paying someone to teach the so-called life skills via reinforcement, you are wasting your money and risking having your child abused. And “positive reinforcement” still demands compliance.

The most important life skill anyone can learn is independent thinking. ABA does not believe Autistics should have independent minds, unless they conform to the neurotypical idea of desirability.

This post is to show how ABA “therapists” dehumanize the Autistics they purport to be helping.

“A BCBA made a set of Cards against Humanity cards for ABA and they are humiliating, degrading, unprofessional, and completely inappropriate.

I have talked to many of you, the BCBAs who are reading this right now, and I know you care and are trying to do the right thing. But when we see something like this card set, it’s really hard for us to talk to any of you because it feels like such an attack and it is coming from the people who claim to be there to help us.

I don’t believe anyone should be practicing ABA on people, but still I respect your dignity and fundamental humanity. Seeing this card deck makes it so hard for me to trust that you return the same respect for our dignity and humanity.

We are not the butt of your jokes. That is not why we exist. It is not what we are for. Please call out your fellow BCBAs who are being this blatantly unprofessional.” (Unstrange Mind Facebook page)

I don’t really know what Cards Against Humanity is supposed to do, but apparently it is supposed to be offensive. In this case, it was directed at Autistics and was created/shared by ABA providers (the BCBA who shared the cards on Facebook is Behaviorbabe).

These are some of the statements in the cards (TW for language and harmful stereotypes):

“Fecal matter”
“A Rapid Method of Toilet Training the Institutionalized Retarded”
“Physical Restraints”
“Fecal Smearing”
“Sensory Processing Disorder”
“Pinch the nose to release the jaw”
“Two person restraint”
“Non-contingent electric shock”
“Self-stimulatory behavior”
“Poo on the floor, poo on the chair, poo on the table, poo on the walls, poo everywhere”
“It may be unethical but I really want to…”

These examples are things that we have been submitted to, accused of, made fun of, forced to suppress, or simply things that are part of being us.

The ABA providers know that, and they use the abuse, the shame, the bullying we experienced to make fun of who we are.

Behaviorbabe posted an (non)apology on her Facebook page – only because we complained. The excuse was that she didn’t read the cards (I don’t believe that) and after several Autistics commented on her post questioning her motives and ethics, she deleted the comments and blocked many. She later said that she blocked and reported only the comments that had swear words, or who were threatening. This is a lie and there are screen shots to prove it.

I did not comment on her post but after I saw that she had deleted the comments, I started checking her older posts.

I saw a video: “What is ABA”. It has a text that reads: ABA is “evidence based interventions aimed at producing socially significant long lasting meaningful behavior change.”

I also saw another video showing how everyone should be using TAGteach, which stands for Teaching with Acoustic Guidance. Basically, it is clicking a device every time the person “behaves appropriately”. The neurotypical behaviorist defines what is “appropriate behavior”. It is like training dogs and it is dehumanizing. It can also trigger abuse survivors. It makes Autistics dependent on the validation of a non-autistic person for everything they do.

So, after I watched the first video, I commented and asked her to define “socially significant”, and to whom it should be significant. I asked the same about “meaningful behavior change”.

Then I watched the second video. I had a comment for that one too but could not comment because I had already been blocked by her.

Remember, I did not challenge her on the post about the cards, or about her “apology”, I simply asked her to define the terms she uses to justify ABA, which I call abuse. That was enough for her to not engage, to simply block me without any answer.

I have been blocked by several organizations and people who treat us as non- people before. I don’t really care because usually their actions prove my point, and even though they continue to deceive many people, I always get messages from parents who thank us, Autistic adults, for making them understand the harm those people and organizations are causing.

I don’t write every time I am blocked or silenced by neurotypical bigots. It would be impossible to keep up with the attempts of silencing me. But I am writing about this one.

I am writing this because this is bigger than you might think.
It is about how ABA “therapists” REALLY see Autistics.
It is about them making fun of us because they see us as broken and hopeless – even as they lie to parents about how important ABA is for Autistics to be “accepted by society”.

It is about their ableism, disguised as “light humor” – are you laughing yet?

It doesn’t matter that the post with the Cards Against Humanity was taken down.
It matters that the cards were created in the first place.
I have no doubt that many ABA practitioners laughed at the cards, agreeing with the statements. I was told it was shared over 1000 times before being deleted.

What matters is that parents are taking their children to sessions of compliance training, where they are being taught as dogs in obedience training, by people who, in their free time, make fun of who we are, and complain about how our existence as Autistics makes their lives so hard (they complain but still make a lot of money while abusing us).

It doesn’t matter if the Autistic child “loves their therapist”. The excuse “ABA is not like that anymore” just got debunked.

The people parents call “therapists helping their children” still follow and embrace the teachings of The Me Book, that calls us “non persons” in its introduction.

That’s what ABA is and those are the ABA “therapists”.
ABA is exactly “like that”. It is still abuse.