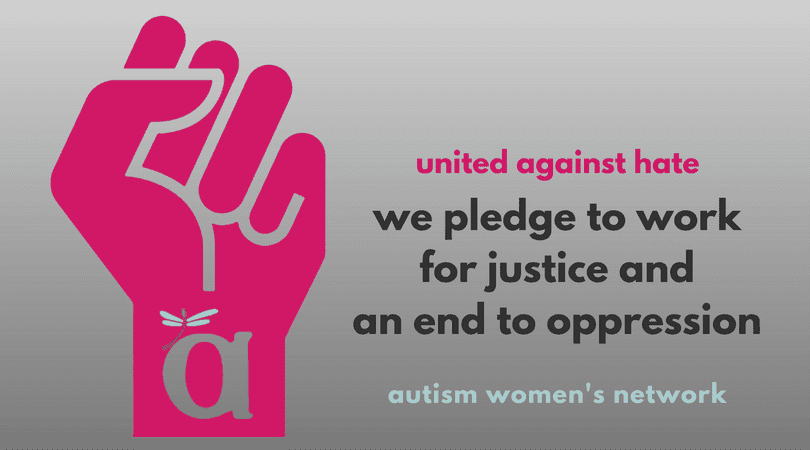 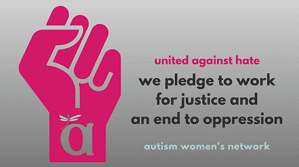 Text reads: “united against hate we pledge to work for justice and an end to oppression” awnnetwork.org (Image is a fist with an impression of the AWN logo centered bottom.)

The events that occurred last weekend in Charlottesville, Virginia when a vehicle driven by a white supremacist drove deliberately through a crowd of peaceful anti-racism protesters (killing one individual and injuring numerous others) shocked and saddened many of us in America. Autism Women’s Network vehemently condemns this racist act of terror that was inflicted upon those who were exercising their constitutional right to assemble and of free speech. In addition, we denounce in the strongest terms possible the “Unite the Right” extremists whose hateful words and actions served to incite fear, confusion, discord, and unrest in Charlottesville, targeting Black, Jewish, and LGBTQ+ people in particular.

Individuals and organizations who share the views of hate-based groups such as the white supremacists, neo-Nazis, and the so-called “alt-right” “exacerbate and perpetuate the long history and painful reality of white supremacy and anti-Semitism entrenched in our nation’s history.” So does the presence of controversial namesakes and objects with ties to the Confederate States. It is shameful that there are a number of public monuments, parks, schools, and other entities paying homage to this period of bigotry still on display today in various parts of the US.

Though the days of blatant, state-sanctioned “Jim Crow” racial segregation are a thing of the past, the tainted, sordid legacy of racial discrimination are ever-present in the near-deification of the pro-slavery Confederacy, neatly repackaged as “Southern heritage” and “pride” to make it more palatable. It is this very hatred that fuels both subtle and insidious forms of racism and overt, violent ones, such as the tragic and murder of Heather Heyer, the young woman who was mowed down in an unmistakable terrorist attack as a result of this hatred.

However, it was bravery, openness, and love that inspired individuals of various backgrounds, Heather included, to unite against hatred and vocalize their dreams for an inclusive, accepting America this weekend in Charlottesville. While we grieve the untimely loss of Heather and send our thoughts and support out to all who were impacted by this atrocious act, we will not allow hatred to win. We will not allow it to cause us to dwell in fear and to give in to the unacceptable demands of hatemongers who wish to take our nation backward.

We shall draw courage from and pledge our solidarity to our friends, neighbors, and loved ones whose bodies are all too often under attack for the “crime” of existing while people of color, Jewish, queer, and trans — especially those whose identities and experiences cross these margins. And we urge political leadership, the media, and the general public to demand and pursue justice for Heather and for all those terrorized and targeted in Charlottesville last week – but not to stop there.

We must take active roles in addressing and dismantling this problem – discrimination and oppression – at its root within our vocabulary, our homes, our social media spaces, our communities, our workplaces, our places of worship, our government, and every other part of our societies. This work cannot wait; it is everyone’s responsibility. If we as a society continue to fail at this, then there will be more bloodshed and more tears at the hands of unbridled hate, and that is an outcome we cannot afford nor accept.