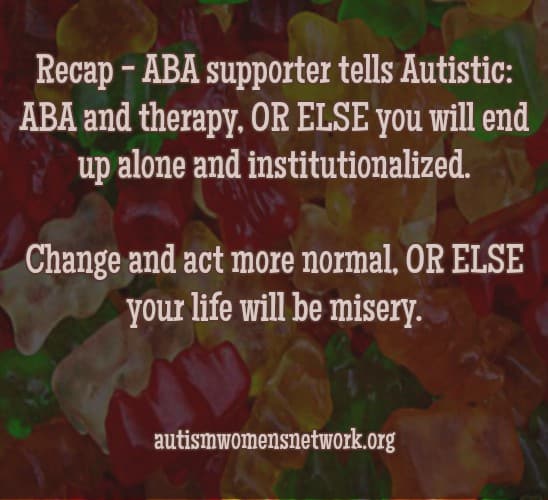 This was the message from someone who commented on an old article I wrote, about how I don’t like ABA. Not these exact words and this person, “Mary”, could be referring to any therapy. But because it was a long exchange, and because ableism is something I can feel clearly, I could read between the lines.

I was appalled by the irony: someone who supports ABA trying to convince an Autistic person who wrote a piece 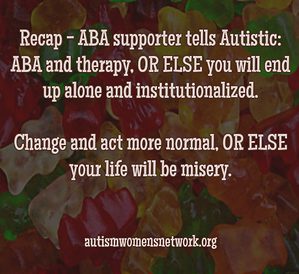 Text reads: “Recap – ABA supporter tells Autistic: ABA and therapy, OR ELSE you will end up alone and institutionalized. Change and act more normal, OR ELSE your life will be misery.”
awnnetwork.org (Image description: the back ground is an assorted variety of gummy bear candies).

citing the reasons why ABA is bad, and resorting to veiled – and open – bullying, condescending words and “advices” to make me “better”, since I wasn’t complying with her.

I want to say that I am not against all therapies. There are some approaches that can be helpful to some Autistics, still respecting our autonomy.

I also believe Occupational Therapy can be helpful if the therapist can recognize and discern between a person’s unwillingness or inability to do something, due to physical limitations, and the reason why they are not doing it.

The exchange in the comments began when someone else claimed to be ‘not Autistic anymore’ because ABA worked for them. Then “Mary” jumped in and went from agreeing with “Former Autistic” to condescension, to bullying, to the message “or else…”

About “Former Autistic”: passing is not the same as “not Autistic anymore”. Therapies are about understanding what is going on in one’s own life and taking steps to improve their quality of life – if, and how, each person chooses to. My article was about how ABA tries not to help Autistics, but to train us on how to pretend to be who we are not. Unless “Former Autistic” took their brain out, rewired it, unlearned everything they knew and learned everything again in a different way, and put the brain back in, they are still Autistic.

But “Mary” used the comments of “former autistic” to show how I should be listening to her and give it another try to “improve” myself.

She was ABA-ing me. I bet she had the gummy bears ready.

The line was crossed when, after I said I didn’t want her advice (about trying more therapies), she said that I only write because I need to make sure my self-esteem is high, and that since I was refusing more therapies, maybe I would see how wrong I am when people who help me get tired and leave, forcing me to go to an institution.

Recap – ABA supporter tells Autistic:
ABA and therapy, OR ELSE you will end up alone and institutionalized.
Change and act more normal, OR ELSE your life will be misery.

What is wrong with having, or striving for a healthy, high self-esteem? I write because I think I am good at it and yes, it makes me proud of myself when people like it. I’m not forcing anyone to read though.

Second, “Mary” was condescendingly telling me that therapies could help me learn how to “do things better” – as in dress myself without any help (between the lines she was saying that Autistics who had ABA will have a better future than me).

I want to be clear. I write about my life, and I don’t hide behind a computer. I go everywhere and I am myself wherever I go. I don’t, though, tell the world the details of my disabilities. Some things are, and will remain private.
I don’t tell the details because I have been bullied and abused because of them. What is relevant about my disabled life is that I have a good life, I am proud, and I am an activist who tries to change things through words.

I never denied that I fear being without the supports I have today because the possibility of being institutionalized would be real. But this is not because I am not having ABA. It is because of the systemic ableism that is ever present in our lives, because we are seen as not human enough. Even as I am very conscious of that, I still refuse to comply and please people who don’t value who I am.

What “Mary” doesn’t know either is if I do have therapies, which therapies I tried, and how much they helped, or didn’t help, me. She assumed I failed because I didn’t try hard enough. She cannot conceive that someone who is very disabled – like I am – can also be happy and proud, refusing to look less disabled for the comfort of the majority.

What “Mary” said to me is what ABA practitioners say to Autistic children: do as I say, OR ELSE…

Note: the comments were deleted and “Mary” banned from commenting. I don’t mind responding to readers but the words used, the message sent by this commenter can be triggering to a lot of other Autistics, as they were to me. Comments are now going to be moderated. I think AWN made the right decision.