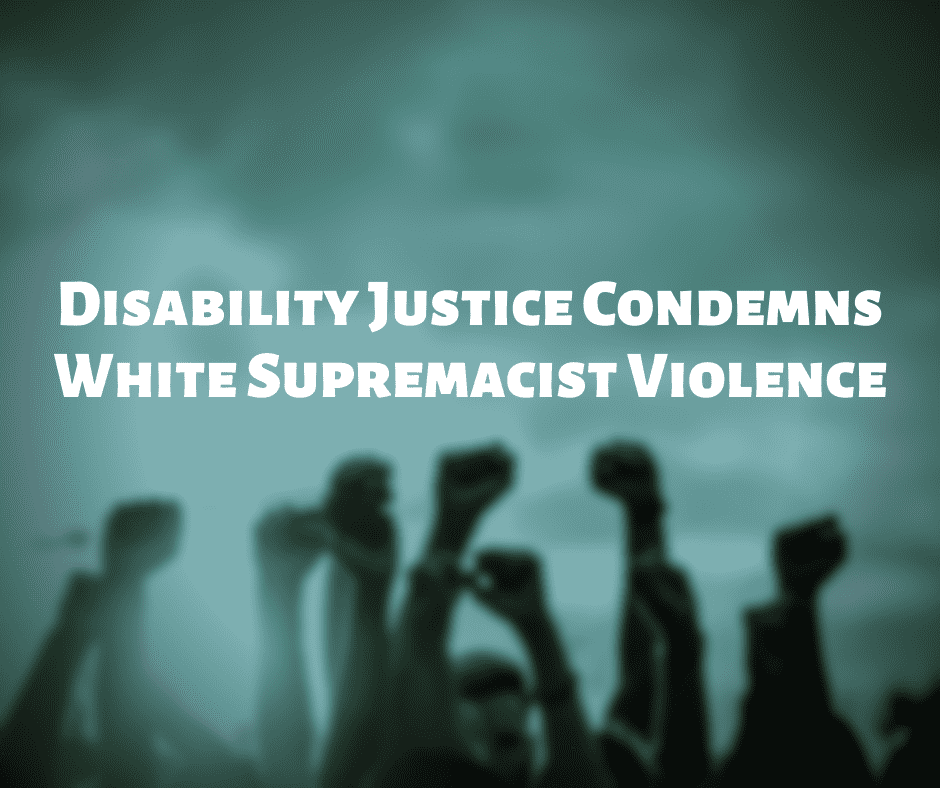 The Autistic Women & Nonbinary Network condemns in no uncertain terms the unabashed display of white supremacist and neo-Nazi violence in the insurrectionist riot in Washington DC on January 6, and in similar riots in multiple state capitals.

On January 6, the sitting president of the United States directly incited an attempted coup to resist peaceful transfer of power.

The openly fascist and nationalist rhetoric used by the current president yesterday repeatedly encouraged “strength” and condemned “weakness.” This rhetoric is deeply familiar to those of us in the disabled community who have long been targeted by eugenicist practices (rooted in race science) aimed to cull “the weak” from the population. Likewise, his comments urging his supporters to “take back” the country marked an open appeal to white supremacy and U.S. empire – values and institutions that have never disappeared from U.S. society, culture, or politics.

The attempted coup prominently featured open displays of racial hatred and white supremacy, and particularly anti-Black racism – for instance, rioters mounted a gallows with a noose and carried a Confederate battle flag through the Capitol. These actions mirror and amplify the type of racist rhetoric, threats, and acts of violence that many of our disabled BIPOC community members have also endured repeatedly, including recent despicable threats targeting Black autistic elder Anita Cameron.

Today, AWN does its work on unceded and occupied land of many tribal nations throughout the nation now called the United States. Our leadership, which includes multiple disabled people of color and queer and trans disabled people, knows that our work requires organizing against the deadly machines of settler-colonialism, capitalism, and white supremacy, along with the violence of ableism.

We bear witness to the constant trauma and psychic assault inflicted on communities at the margins of the margins. We carry with us rage and horror. We offer our solidarity to the residents of a historically majority Black city with large immigrant of color communities in its surrounding suburbs, the largely Black and Brown janitorial and maintenance staff left to clean up after the rioters, and the innumerable service workers on airlines and in hotels, subjected to repeated hordes of white supremacists bringing with them hate and heightened risk of COVID-19 transmission. We carry the devastation of witnessing law enforcement simultaneously inflict horrific brutality on Black and Brown protesters while enabling white supremacist rioters to enter an otherwise heavily policed building in the nation’s capital. And at the same time, we are committed to vigilance against those who would advocate for expansion of policing, mass surveillance, or mass criminalization as a way to prevent similar violence from white supremacists in the future, because such measures will always only hurt Black, Brown, queer and trans disabled people protesting against injustice the most.

We bring with us our unequivocal commitment to disability justice advocacy that centers racial justice and challenges the core foundations of white supremacy. We honor our disabled BIPOC ancestors and community elders’ labor, leadership, and love. And we will keep moving forward in community, in solidarity, and in radical resistance.

← AWN announces $100,00 grant from Disability Inclusion FundNeurodiversity, Changelings, and what Fate: The Winx Saga can teach us about acceptance →