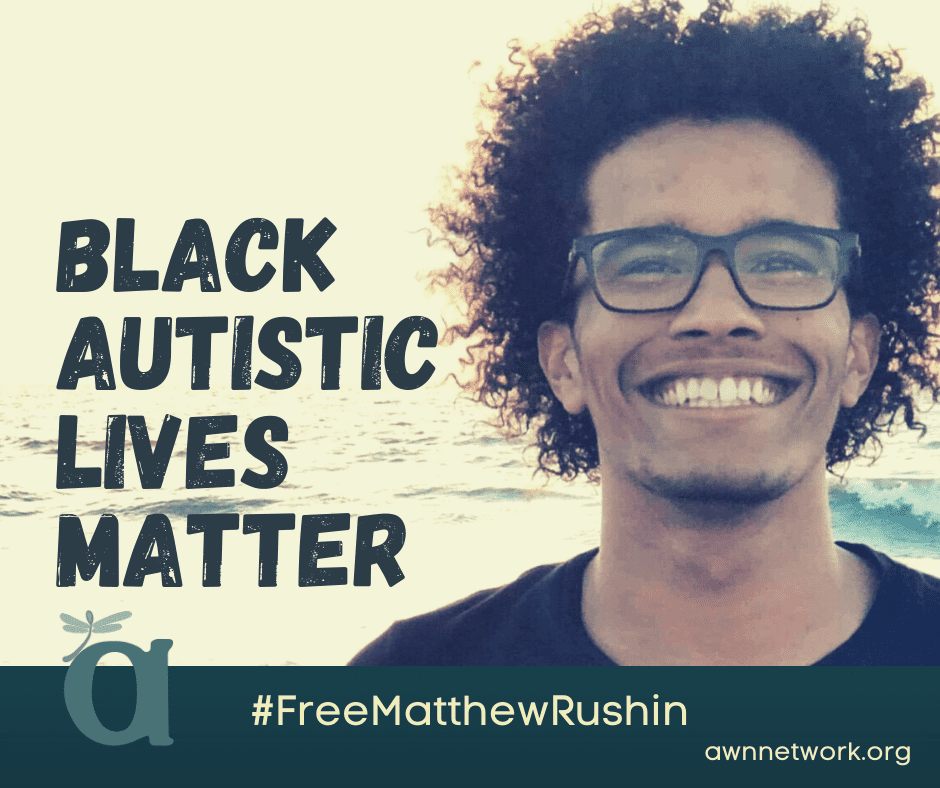 The Autistic Women & Nonbinary Network and The Autistic Self Advocacy Network unequivocally condemns the racism and ableism evident in Virginia’s unjust prosecution and sentencing of Matthew Rushin. As leading national organizations fighting for the civil rights of autistic and other disabled people, we are deeply troubled by the Virginia Beach Commonwealth Attorney’s prosecution of this case. In support of Matthew’s campaign to return home, AWN has joined the Autistic Self Advocacy Network in sending a joint letter outlining our concerns to Virginia Governor Ralph Northam and Secretary of the Commonwealth Kelly Thomasson. You can read the letter here.

After a serious car accident involving two separate collisions last year, Matthew was charged and pleaded guilty to two counts of malicious wounding and felony hit and run, which are charges that require intent to harm others. Police and prosecutors claimed that the incident was an attempted suicide despite Matthew’s later repeated statements that it was an accident and he had no intent to harm others or himself. At no time did police or prosecutors provide appropriate accommodations, nor did prosecutors or the courts consider Matthew’s disability-related communications access needs, which seriously undermines the validity of the guilty plea. Matthew was instead shunted into a criminal legal system that routinely disregards the needs and humanity of disabled people, and especially disabled Black, Brown and Native people.

We know all too well the devastating harms inflicted on disabled communities of color by the criminal legal system and by mass criminalization and incarceration, including the severe traumatization, denial of services and accommodations, and medical neglect that affect many disabled people in prison.

We support those calling for Matthew’s release and return to his home community, fully and without equivocation. We know that Matthew would never have been charged and sentenced as harshly as he was were he white and nondisabled. We also recognize that incarceration is unjust even when people harm others.

We also recognize and are saddened by the serious harm done to four separate people in the car accident Matthew caused, including the nearly two-month coma that George Cusick suffered afterward, his acquired traumatic brain injury and related disabilities, and his current long-term institutionalization in a skilled nursing facility.

As our communities observe the twenty-first anniversary of the Olmstead decision, we must be steadfast in our fight for community integration and freedom for everyone. Neither Matthew’s incarceration in prison nor George’s institutionalization in a nursing home promote justice or healing for them or their families. Matthew Rushin and George Cusick both deserve to be home with their families in the community, receiving services and supports that recognize their autonomy, support their right to self-determination, and affirm their human dignity.

← AWN receives rapid response grant for changes in programming due to COVID-19Latinx Heritage Month: Being Puerto Rican and Autistic →