I have written quite a lot about ABA (Applied Behavior Analysis), which I call Autistic Conversion Therapy. The official language of the program is “to make Autistic children indistinguishable from their peers”. Every time I write about it, I see comments that go from agreeing with me, and supporting the points I make – sometimes with personal stories of PTSD caused by ABA – to disagreement and outrage, to hate messages. 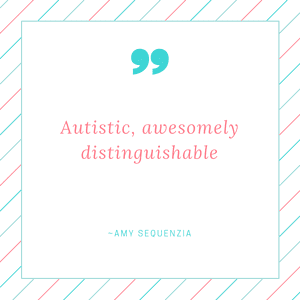 Text reads “Autistic, awesomely distinguishable ~Amy Sequenzia” The image is a white graphic with pink and teal striped border and large quotation marks in teal above the text.

The people who disagree with me usually say that ABA is what helps their kids learn things like “buttoning their shirts”, or “safety”, or “life skills”. They claim that they don’t want to change who the kids are, even if they say that they want the children to be accepted by a society that will only accept them if they look less Autistic.

As a friend says: let that sink in.

I love even more when I see them thriving as they (and their parents) openly reject ABA. Even if they are not aware of this, they are debunking every excuse ABA proponents give to justify the awful practices of the “therapy”. They do this by simply being who they are.

I don’t know if they can – to use one of the ABA proponents favorite “reasons” – dress themselves without help. This is not something I, or you, need to know. Needing help is not shameful. I need a lot of physical assistance, and this does not devalue me as a human being.

I don’t know how overwhelmed they get when the – often – inaccessible and unaccepting world becomes too much for their senses. I don’t know if they experience meltdowns and shutdowns. Most Autistics I know do, including me. If they do, those moments remain, as they should, private. Having a meltdown, or needing to be alone and “away from the world” from time to time does not devalue us as human beings.

These young Autistics are growing, learning, thriving and being themselves without being forced to look less Autistic, without having to comply with normalization.

Emma Zurcher-Long is 14 years old, typing her ideas when her spoken words don’t reflect what her brain wants to convey. She is taking classes that are ahead of her age group and she is a co-director, and main subject, in a documentary.

She values herself, and her voice. She is learning about herself without people telling her that being Autistic and having to find a different way to express herself is shameful. She has a lot to say, she is saying what she wants, and she has a film to show that.

Wisdom, self-knowledge and self-advocacy: these are life skills.

Brooke did have ABA earlier in her life but her self-knowledge has improved from the moment she was not forced to comply, or forced to “act normal”.

Brooke said this: “I like to sing and dance and almost anything. I like being autistic.”
She also said she was “all done now” when she had nothing else to add.

Self-advocacy, and finding her own way, her own time: these are life skills.

Adam Wolfond is 14 years old and non-speaking. He learned how to type through FC (Facilitated Communication), with initial support of his hand and wrist. Today he has several facilitators, with different levels of support. With at least one of them, he only requires a light touch on his back.

Adam wants to be respected for who he is. He is learning and growing without being forced to look and act “less Autistic”. He makes videos of himself, how he experiences the world, and how he learns about safety, like crossing busy streets.

Finding his own way of learning about safety, self-knowledge: these are life-skills.

Adam words: “The way I am is awesome and I am questioning the want of others to change us to be like them”.

These three young Autistics make me happy. They are proud of who they are, they are spreading positivity about Autistic culture.

They are awesomely 100% distinguishable from their peers and this is one big part of Autistics demand to be accepted as we are.

Note: it is not a coincidence that Emma, Brooke and Adam have supportive and accepting families that listen to Autistic adults, and are not afraid to acknowledge possible mistakes they’ve made, then correct them.

Emma’s words (Only one example. You can explore the blog for more) http://bit.ly/2afyAEY

Diary of a Mom blog (Written by Brooke’s mom. What is posted about Brooke has Brooke’s permission)
https://adiaryofamom.com

Adam’s video explaining how he experiences the rain (with awesome stimming!)

More videos in that You Tube channel