I’ve read an article on the online Autism Parenting Magazine that was so bad, my initial reaction was a giant WTF? 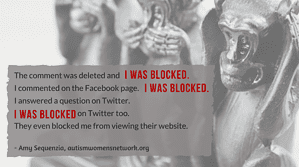 Image has a photo of “see no evil, speak no evil, hear no evil” monkey figures in background. Text says, The comment was deleted and I was blocked. I commented on the Facebook page. I was blocked. I answered a question on Twitter. I was blocked on Twitter too. They even blocked me from viewing their website. – Amy Sequenzia, awnnetwork.org”

It was written by someone who clearly doesn’t know anything about autism. The magazine is self-described as “a magazine for parents of autistic children as well as professionals seeking to work with children on the spectrum.”

I don’t know if the non-autistic writer was paid, or if the magazine makes money each time the article is read, but since they decided to have such a bad article in the magazine, they should rename the publication “Bad Parenting Magazine”.

I want to go through some of the most outrageous and absurd statements.

The writer starts by asking: “What is low-functioning autism”?

The first absurd and false statement is that some Autistic children are diagnosed with “low-functioning” autism. That’s false because functioning labels are not part of a diagnosis. As I said, this is an invention to grade us based on partial observation, assumptions, lack of knowledge of what autism really is, and the marketing surrounding everything autism: “therapies” that are abusive and very expensive, organizations that make a lot of money to pay their CEO’s, and the infinite assortment of puzzle pieces, among other dehumanizing things, all used to make us “better”, to “fix” us.

Instead of answering her question, she lists all the “deficits” of Autistics that “fall on the severe end of the spectrum”.
She could have looked that up on Wikipedia. Maybe she did.

Then the biggest WTF statement:

So, something that does not exist, that cannot be defined, can cause genetic variations and epilepsy?

Maybe she didn’t structure her statement in a way that would attempt to make sense, but it is still flawed in the correlation.

I am Autistic and epileptic. She would consider me “low-functioning” because I have most of the perceived “deficits” she listed.

I have many Autistic friends who are also epileptic. Many of them would be considered “very high-functioning” by this writer.

My (snarky) questions to her are: how does this “low-functioning” autism go around causing epilepsy? Is it a virus? Is it bacteria? Is it airborne? Do washing hands help? Is it contagious?

After several paragraphs of autism-as-a-pathology statements, like all the other ones that have been written for the last 20 years, the writer decides to show her ableism again:

“Ways to improve your life with a severe autism diagnosis.

Families dealing with a diagnosis of low-functioning autism have several options to help improve their everyday lives. A combination of professional support, in-home modifications, educational opportunities, and community support can be beneficial.”

So, if a child is diagnosed as Autistic, and someone says “it is severe!” the parent should do everything possible to improve their (the parent’s) life. Because of course, autism is about the parents, not about Autistics.

The whole article and the disinformation showed how ignorant the writer is, and how the people who run the magazine are more concerned about “likes” “shares” and “retweets” than they are about real information.

But this is not the worst part.

A friend of mine commented on the article and pointed out the absurd claims. The comment was moderated out. A couple of days later she contacted the magazine about the same subject. Still no answer from them.

I commented on the Autism Parenting Magazine Facebook page. I was blocked.

I answered a question on the Autism Parenting Magazine Twitter account. They were asking “what was the problem with using the term “low-functioning”. I was blocked on Twitter too.

They even blocked from viewing their website (but I can still see it on my iPad).

However, they did change the words in the article. It doesn’t make it any less pathologizing and dismissive of Autistics, but the editing eliminated the absurd and ridiculous claims like that one claiming that “low-functioning” autism causes epilepsy and Fragile X Syndrome (I have screen shots of the articles before and after the editing, and of the comments I made).

And this is the worst part: despite recognizing that the statements were wrong and that they messed up, they chose to pretend that nothing happened, while trying to silence Autistic voices.