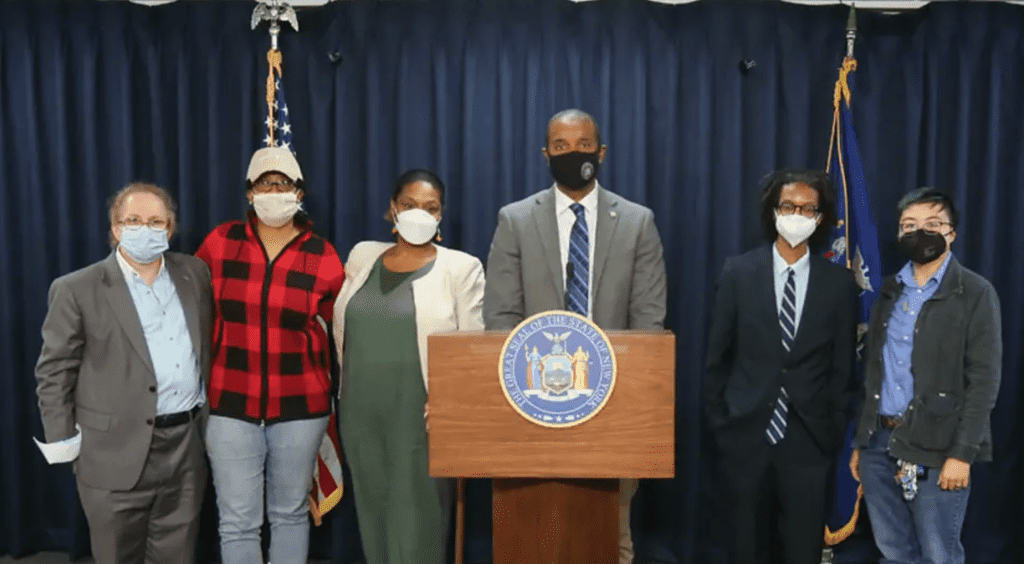 Last week, Lydia X. Z. Brown and I traveled to Albany, New York to speak at a press conference within the New York state capitol. We urged state legislators to pass New York Senate Bill 8935, named Andre’s Law for Andre McCollins, a survivor of abuse at the Judge Rotenberg Center. This long overdue bill, sponsored by Senator Jabari Brisport (and Assemblymembers Harvey Epstein and Jo Anne Simon in the Assembly), would prevent the state from financially supporting institutions that use harmful treatments. If the bill becomes law, the state will cease sending New York residents to institutions that employ electric shock aversives and other types of aversive “therapy.” I placed therapy in quotation marks because there is nothing therapeutic, or healing, about aversive treatment.

Aversive treatment, which subjects people to punishment for (subjectively) undesired behavior, is widely recognized as a cruel and ineffective  practice. Only one institution (out of all the hospitals, schools and residential facilities) within the U.S. is known to employ electric shock aversive treatment. That institution is the Judge Rotenberg Center (JRC) in Canton, Massachusetts.

So why is New York’s Andre’s Law essentially targeting a Massachusetts institution? How are they related? Well, the state of New York—which banned aversive treatment within its own state borders in 2005—has spent approximately $100 million dollars over the last decade sending disabled people to out-of-state facilities, including JRC. Furthermore, many of the people at JRC are Black and Brown disabled people. As of 2018, 52% of JRC’s student body is Black and 27% are Latinx, compared to only 17% who are white (data on the  adults who are sent to JRC is unknown).

Andre’s Law is named after a Black autistic youth, Andre McCollins, who in 2002 was restrained for seven hours  and shocked 31 times  for refusing to take his coat off. The shocks inflicted burn wounds on Andre’s arms and legs. (You can watch or listen to the video clip of Andre experiencing the shocks here, but please take care as the footage is graphic and gruesome.)

The National Association of State Directors of Developmental Disabilities Services called for a ban on electrical stimulation devices due to their painful and coercive effects on disabled people. The Food & Drug Administration also found that aversive treatments worsen people’s physical and mental health by giving rise to anxiety, depression, PTSD, burns, and tissue damage. As a result, the FDA attempted to enact a ban inMarch 2020, which was unfortunately vacated by the U.S. Court of Appeals over lack of statutory authority, notwithstanding the FDA’s findings on the treatment’s negative health impacts. Moreover, nearly ten years ago, then-Special Rapporteur on Torture for the United Nations, Juan E. Méndez, expressed great concern over JRC and its use of aversive treatment. In a Human Rights Council report, Méndez stated that corporal punishment can be deemed torture or cruel, degrading, and inhumane treatment. He also linked aversive treatment and its disparate use on people from marginalized groups, thereby calling into question the treatment’s necessity and discriminatory impact. Former UN Special Rapporteur on Torture from 2004 to 2010, Manfred Nowak, also described aversive treatment as torture.

New York sends more people to JRC than any other state. It is past time for New York to demand that its most vulnerable residents be treated with dignity and respect, and refuse to support institutions that use aversive treatment. This is a crucial moment for New York to show its residents, public and private institutions (including JRC), other states, and the world that it recognizes the severe harm that JRC has inflicted on disabled people, and that the state is ready to stop  funding institutions that abuse disabled people.

I encourage you all to read more about JRC and the harm of aversive treatment. Lydia has curated an extensive living archive about the JRC. If you are a New York resident, NOW is the time to reach out to your representatives and ask for their support. The Autistic Self Advocacy Network created a helpful toolkit for how to find and contact your New York State Senator and Assemblymember. But even if you aren’t a New York resident, you can still make a difference by letting loved ones who live in New York know about Andre’s Law and posting about it on social media. Together, let’s help get  this #StopTheShock legislation passed.