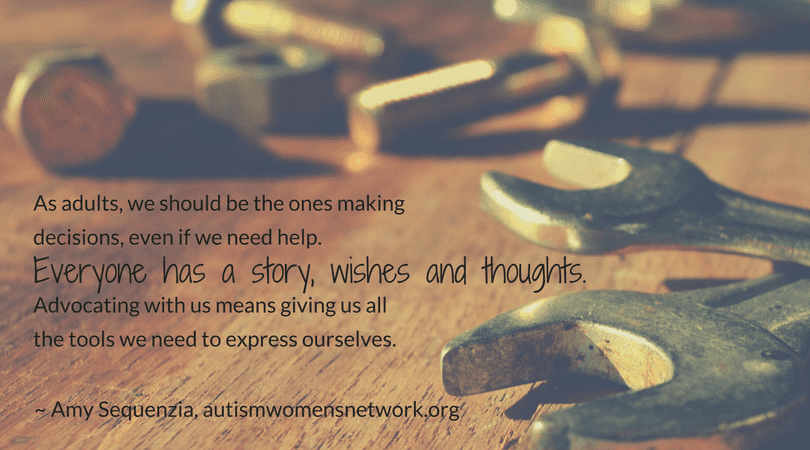 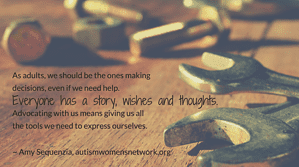 Image is a warm toned photo of a set of wrenches and other tools on a wooden surface. Text says, “As adults, we should be the ones making decisions, even if we need help. Everyone has a story, wishes and thoughts. Advocating with us means giving us all the tools we need to express ourselves. ~ Amy Sequenzia, awnnetwork.org”

Parents of Autistic children have to learn how to advocate for supports in school, in the community, and even at home. This is not something that gets done after a few hours, or a few days. It begins with the diagnosis and it can last a lifetime.

Fighting for supports is like a very long marathon. If the Autistic child has other disabilities, the complexity of the fight increases. As the child grows and their needs change, so does the type of supports needed.

Autistics are neurodivergent, therefore we do not conform with the neurotypical way of doing things. Even as adults, we will always have to find supports that allow each one of us to lead the life we choose. That is true if we visibly need a lot of help, or if we are just assumed to not need any help at all.

I am one of the Autistics that will always need a lot of help. Some of our parents will keep advocating with us – notice that I said “with”, and not “for”. As adults, we should be the ones making decisions, even if we need help. Everyone has a story, wishes and thoughts. Advocating with us means giving us all the tools we need to express ourselves. Even if some of us reach adulthood and still don’t have the tools for an efficient communication, parents should seek supports that respect us as human beings.

These parents become very defensive and evoke the tired argument: “you are not like my child”.
This argument is used as an attempt to end the conversation. In reality, it shows its weakness. It is true that no Autistic is like the other, as no human being is like another but the experiences of a neurodivergent brain are much closer to the experiences of other neurodivergent brains than a neurotypical one.

There are many examples of parents assuming that, because their children have high support needs, or cannot type or speak, or have co-occurrent conditions that make the world even more overwhelming, that they will never learn and grow.

The parents dismiss any Autistic voice if that Autistic is perceived as having no support needs. It is also assumed that the Autistic speaking up has never needed supports.

The parents also dismiss any Autistic who can take a bus, attend a class, buy some coffee. They assume that if their children need an assistant all the time, they are never going to be their own advocate.

But then an Autistic adult – who cannot speak, and/or learned how to type later in life, and/or cannot safely cross a street, and/or has occasional public meltdowns, and/or is incontinent, and/or is “just like their children” – speaks up and says: your child can learn how to advocate for themself, they can learn how to have an independent mind.

Then the parents dismiss that voice too. They say that their children will never be “as successful” as the Autistic person who debunked all of their biased beliefs.

These parents are bad advocates.
They show they are ashamed of their child.
They see the child as a failure.
They don’t want to do the hardest work in advocacy: to build their child up, against the ableist, normalizing, conforming society.
They cave to ableism and bigotry.
They are more concerned about “being right” than “doing right by their children”.

They fail to understand that being a “successful” Autistic person does not mean being able to have a “normal” job, or live “independently”. Being successful means having the tools to make choices and decide how to lead our lives. An independent mind does not require conformity to normalizing paradigms.

But these parents are being bad advocates for yet another reason: they are advocating AGAINST their children.

Parents of Autistic children should listen to Autistic adults. It doesn’t mean that they must agree on everything. It is ok to ask questions. By listening, I mean not immediately ignoring and dismissing our voices or, as it has happens more often than you might think, threat Autistic adults with violence. They also block us on social media when we show them how their attitudes might hurt their children.

Listening means taking the time to think about what we say instead of just reacting, being defensive. We tell our stories because it might help the younger generations of Autistics – their children.

The IACC, Interagency Autism Coordinating Committee “is a Federal advisory committee that coordinates Federal efforts and provides advice to the Secretary of Health and Human Services on issues related to autism spectrum disorder”.
The committee has 12 Public Members. Only 3 are Autistic. That’s because the parents (except for one) and some of the other members fought hard against Autistic representation, even as Autistics were saying that there should be not only more representation, but also more diversity – like Autistic people of color and non-speaking Autistics.

Recently, during a meeting, those parents complained that there isn’t enough Autistic representation in the IACC. They don’t consider the ONLY 3 Autistics they “allowed” in the committee to be “Autistics enough” because they are “not like their children” (usually meaning that the children have VISIBLE high support needs, or are intellectually disabled, therefore assumed unable to have any thoughts). BUT THEY BLOCKED THOSE AUTISTICS TOO.

Support needs don’t define humanity. We all have support needs, and ableism and normalization are the reason why some of us are disrespected and dehumanized according to which supports we VISIBLY need.
Parents (except for one) and “professionals” in the IACC do not agree with the statement above. To them, their children are barely human and cannot learn or grow. Never. They will not even try and encourage self-determination.

In case you don’t know, one of those parents who is part of the IACC Public Members is Alison Singer, the woman who said, on camera, about her fantasy of murdering her Autistic daughter. She said that while the daughter was in the room. She told the world that only her other (non-autistic) daughter had a life worth living.