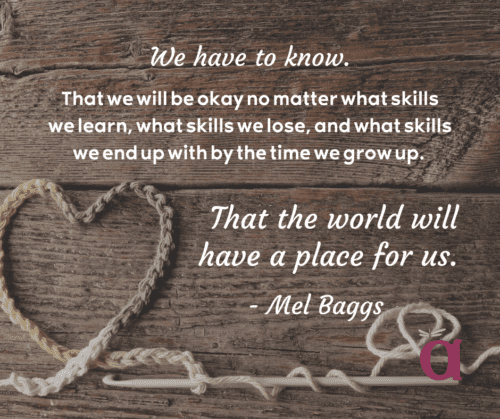 Yesterday, the autistic community, the self-advocacy movement, and humanity at large lost a titan, a leader, a visionary, a public intellectual, and an artist whose work has influenced, inspired, and forged paths forward for thousands of autistic activists and advocates for decades. Amelia Evelyn Voicy Baggs, known to friends as Mel, died in Vermont, where sie had lived for many years after migrating from hir home among the California redwoods, crocheting tapestries and shawls, loving cats, and spending time with nature. Sie was a powerful advocate and writer who consistently named injustice and constantly demanded better, while also creating and curating some of the earliest and most essential writings on autistic culture, neurodiversity, and autistic experiences that many of us still turn to today.

Our movement exists in large part due to hir work, much of it catalogued on hir blogs Ballastexistenz and Cussin’ and Discussin’, and in the original autistics.org archive. AWN too was once privileged and honored to have published one of Mel’s essays in the anthology What Every Autistic Girl Wishes Her Parents Knew. We had always looked forward to Mel’s future work in the many venues where sie shared it.

Mel’s death came after years of documenting gross human rights violations and medical ableism that repeatedly endangered hir life – the very issues that sie consistently advocated against throughout hir life, as they impacted hirself and innumerable other disabled people. AWN’s board, staff, and volunteers are deeply saddened by hir passing, and also enraged by the repeated failures of so many systems and organizations to do anything to prevent Mel’s early – and avoidable – death. Our hearts go out to Mel’s family (both hir family of origin and hir family of choosing) for their indescribable loss

We hope fervently that the work we do will continue to honor the values and principles that Mel upheld in hir life – of communication access as a human right, of human rights for all without exception or condition, of self-advocacy that cares about people first and builds community around supporting and caring for one another’s access needs regardless of specific disability, of the importance of kindling and sustaining our connection to the natural world around us. May Mel’s wisdom and convictions guide us, and may hir memory be an eternal blessing.