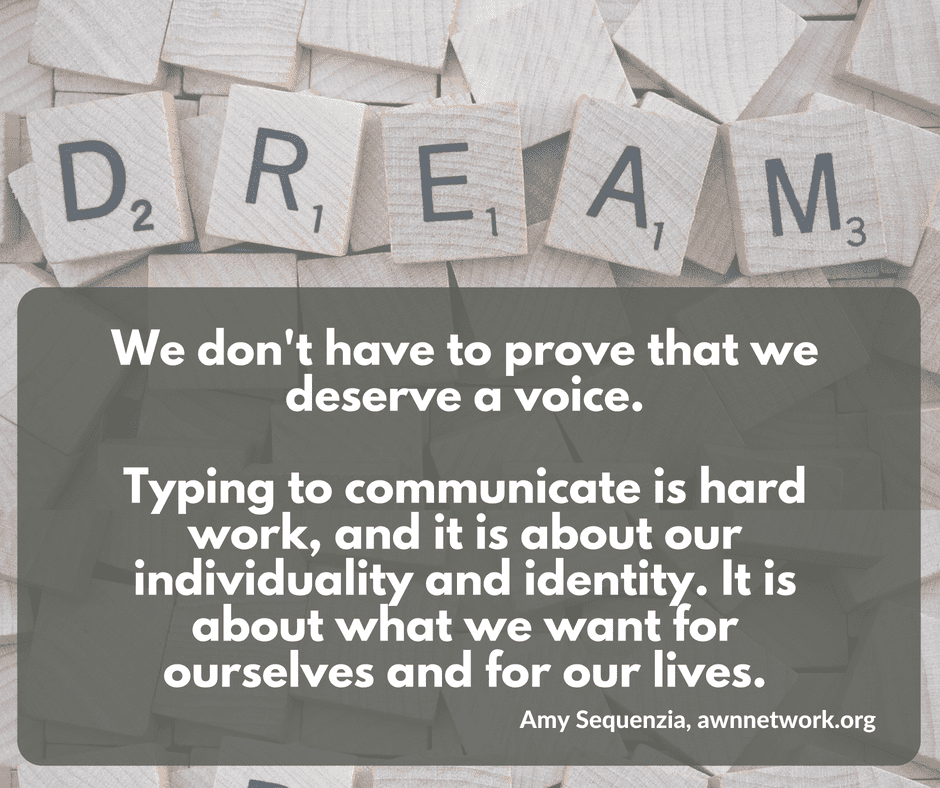 From time to time typed communication, and people like me who use typing as our chosen method of communication, are attacked and disrespected under the guise of “protecting our human rights”.

Actually, the attacks never stop, they spike from time to time.
Now is one of those times.

I am talking about Facilitated Communication (FC) and Rapid Prompt Method (RPM).

ASHA (American Speech-Language-Hearing Association), through a committee composed of people who cannot understand how a neurodivergent brain works, and how the body of a neurodivergent person responds to internal and external input, decided that typists don’t have the right to communicate in a way that works for us, unless they – neurotypical people, who never met us – say what our human rights are.

There is also a statement, initiated by Autistics, demanding that anyone talking about autism and Autistics be respectful of us and to our neurology. The problem is that some of those Autistics co-signing the statement have disrespected and attacked me based on their bigoted views on how I communicate (or how I should look, what kind of supports I should have).

(Warning: I will use ableist slurs).

Other than the fact that organizations, professionals and “experts” fear losing money if we don’t need, or if we refuse to use, oral speech to communicate, and that we might find the freedom to say “no” and expose all the bullshit they try to make us comply with, they cannot accept that someone who looks so “retarded” can have insightful thoughts, or common sense.

This is also true for a large part of the Autistic community. They don’t want to be seen as part of a group of people who are very disabled, who look “retarded”. They equate intellectual disability with intense support needs. Like one prominent Autistic once said, he was “not like those severe Autistics who need diapers” (paraphrasing).

The usual argument is that FC and RPM facilitators guide the hand of, or the device used by, the typist – they don’t explain the “manipulation” when there isn’t touch, or when the device is on a table, without anyone but the typist touching it. They argue that every typist, after a FC or RPM session, shows remarkable “intelligence” and talent that studies fail to prove. They don’t show knowledge about the methods (because none of them really know the methods).

They don’t meet us, they don’t care about learning the process, they refuse to acknowledge the many studies and evidence of authorship. Their assertions are based on older assertions, based on even older assertions made by bigots – without any one of those bigots ever actually meeting us.

Some of us are, indeed, the stereotypical “retarded”.

STEREOTYPICAL – go check the definition of this word.

So what? To the bigots, to the people who believe they know so much:

Most of us use typing just to express who we are, day by day, in our very mundane lives – even when we experience extraordinary moments.
We don’t have to prove that we deserve a voice.
We don’t need you to allow us this choice, or to twist the meaning of human rights to fit your agenda.

Typing to communicate is hard work, and it is about our individuality and identity. It is about what we want for ourselves and for our lives. It is about our autonomy, about our growth as we teach our facilitators what respect means, as we fail and start over, as we defy assumptions and refuse compliance (“professionals” don’t like defiance, they want compliance) – because we are REAL PEOPLE.

Your problem is not with FC or RPM.

Your problem is your fear and disdain for people who have, or you see as having, intellectual disabilities.

It is about your need to look superior, or your fear of being seen as part of a group of “retarded people”.

It is about your need to “fix” us according to neuro-normative standards.

Your position shows the very opposite of respect and human rights.

Your position shows bigotry and an entitlement of supremacy.