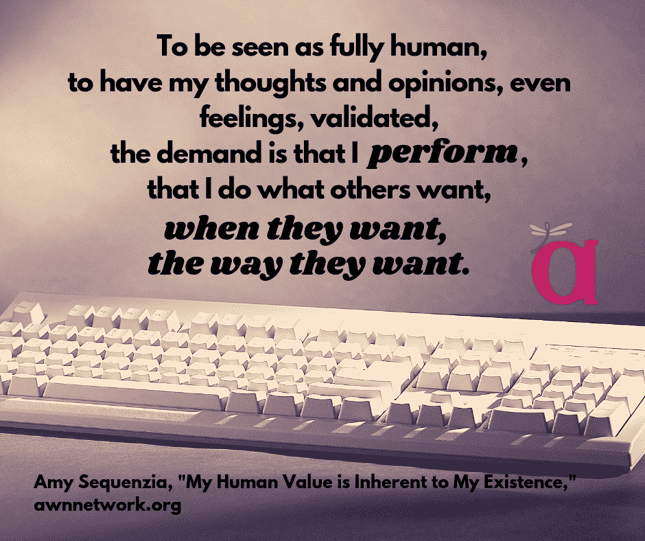 This article is not supposed to incite pity, or even anger. I am just hoping a few people will at least try to empathize with the many typists who are dismissed, ignored, attacked, dehumanized, silenced, all because the way we communicate doesn’t fit the definition of “valid” method of typing. This claim of invalidity was manufactured by, among others, people who make money off our supposed need to be fixed, to conform with rules our brains and body defy for the simple reason that we are neurodivergent and disabled.

This is about my personal journey, and my opinion based observations about other typists.

I am referring to, again, FC (Facilitated Communication) and RPM (Rapid Prompt Method). The ongoing attack on us, plus the lies regarding “lack of evidence”, the often ignored fact that many typists no longer need, or never needed any physical contact to type, the also ignored fact that many of us have been tested over and over, succeeded and passed those tests, the misdirected focus by some who claim to be supportive of us while not showing any support at all, all this makes me feel like I am yelling (yes, I am using this word on purpose) at a void (which also seems to be where we are placed by the haters and the on-the-fence “allies”). It is like trying to reason with Donald Trump about facts.

There is plenty of peer reviewed research and scientific studies that validate FC and RPM. Not all of them cite the methods – some do – but they confirm the link between autism and movement.

There is too much focus on typists having to prove our authorship to a point where we have to expose ourselves to people who will remain skeptic, too much focus on how we look, and move, and how much support we need in our lives as well in typing, instead of on what we type, on our message, on the numerous times we did “prove” authorship but were not filming and recording those times because we don’t live our lives in a reality TV show.

There is a separation of who we are from how we type. I mean by that, our daily lives, our existence, is not put in the context of our journey. It is unfair to assume anyone’s life is linear but that’s how we are judged: we can never have a moment of regression in the ability to type, we can never make a mistake, or even change our typing style – as in exploring new ways of saying something. If we do, we are deemed “frauds”.

Basically, we are not seen as humans, unless a group of people who don’t really care about getting to know us tells the world that we are indeed real people.

Some “allies” are afraid to fully support typists against attacks. They use the “we need to make sure the facilitators/assistants are well trained and ethical” type of argument. While this is a correct statement, it does not address the bigotry towards typing to communicate. There are several facilitators and support people who also expose themselves to scrutiny. FC, via the Institute on Communication and Inclusion at Syracuse University for example, has ongoing training available, a network that seeks to improve the method, guidelines and ways to confirm authorship without discrediting all aspects of a person, looking at the context of a supposed controversial event. By using the “make sure” argument, allies invalidate all the work and progress made, and the argument doesn’t address the general discrimination in the community.

It is a little like trying to defending the rights of immigrants but still allowing the argument that some immigrants are criminals to justify giving more power to abusive authorities. Everyone gets hurt.

I want to tell you something about my typing process, in case you don’t know. I have written about how hard typing can be, about how seizures and motor coordination can interfere on how much physical support I need from one minute to the next. What I have not talked about is how I work everyday to be better at typing. This means that, despite being proudly non-compliant and proudly nonconforming, I still work on conforming with the idea that independent typing makes me inherently better. I don’t think I am alone on this internalized ableist view.

The reason why I work daily on typing with no supports, or with very little support, is also because I am tired of my disabilities being blamed for my dehumanization.

The thing is, I use metronomes, drums and rhythm exercises, I try to meet other facilitators, a practice that gives me more experience with people I don’t know very well, I work on answering questions in front of an audience – that sometimes includes people who want to “prove” that FC is not valid. I don’t hide and I answer the questions until I reach a point of exhaustion.

Yet, I still cannot type a whole sentence independently, consistently.

Yet, my words, my ability to have a thought, and my humanity are still questioned.

To be seen as fully human, to have my thoughts and opinions, even feelings, validated, the demand is that I perform, that I do what others want, when they want, the way they want. If I fail – once – I don’t get another chance, and I am deemed not worthy of being considered a human being.

I will continue to work on getting better at typing – even if consistent independency will likely remain elusive – I will work on getting rid of that internalized ableism that teases me with doubting my own humanity, that tries to force me to see myself as bigots see me.

I am happy, elated, when someone says my words helped them, or their non-speaking child, that because they read my words, they have something to help them fight for their children’s rights. But I will, now, focus more on my own needs. It is a little selfish, but also defiant. I refuse to be observed or tested to prove my worth, or the worthiness of my words.

There are a lot of typists who have been fighting a bigoted system just to have basic rights. Some of them are children and the haters manufacture false research to deny the kids an inclusive education.

As I started working on this article, my friend Rua Mae Williams posted about the anti-FC literature and their research, which is so “biased that practices that are common in cognitive psychology research, such as practice trials and repeat trials, are regarded by skeptics as methodological flaws in pro-FC research”. Rua Mae Williams also commented: “If you don’t use your mouth to make language, then you are a not allowed to be believed until you go to a lab, perform an arbitrary task for unfamiliar hostile strangers, and you’re also not allowed to have practiced said task or the lab-setting also becomes invalid.”

This is one reason why the “let’s make sure” argument needs to go. It does not advance our rights, it ignores the relationship of trust between facilitators and typists, it ignores the set of best practices that is already part of training to use the method. All the argument does is avoid a clear position. Every time something remains unclear, it is used to deny rights.

One last thing: I will work and do my best to have at least some consistency on my typed words, by being able to independently type a simple, short answer every time I am asked about the “FC controversy”. I will start right now.

Yay for no more compliance with performative independence!