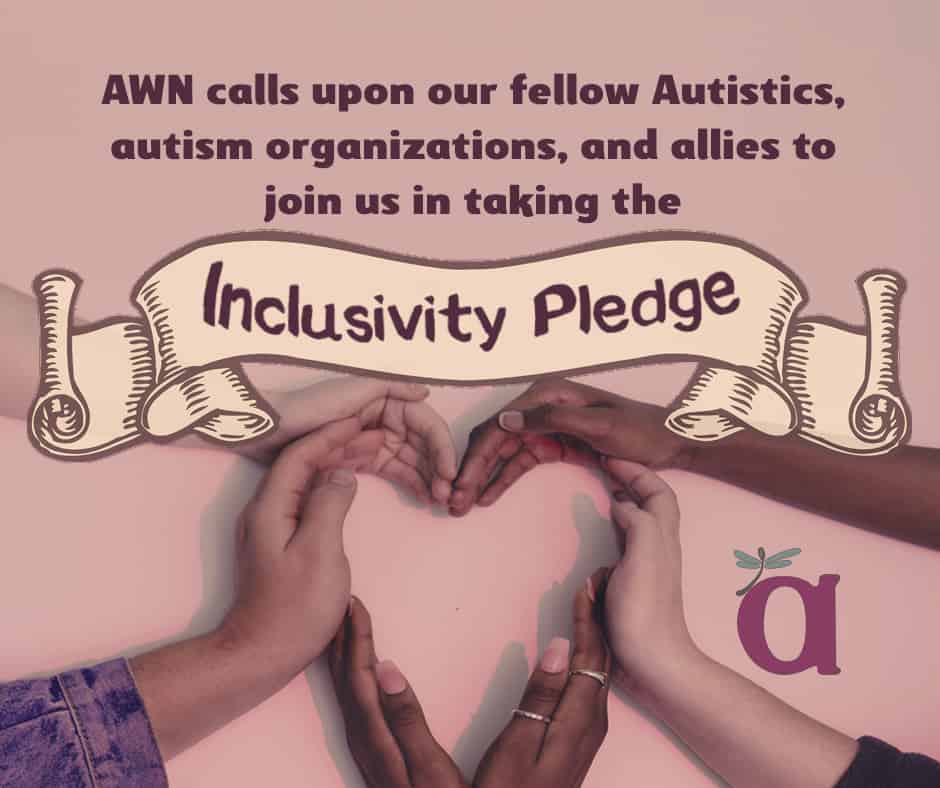 April is a busy month in the Autistic community. What started out many years ago as an awareness campaign led by parents has now turned its focus towards what matters to actually Autistic people. Calling now for acceptance, community supports, and intersectional activism, our community stakeholders come together for a month-long rally of elevating an Autistic-led movement with passion and purpose. 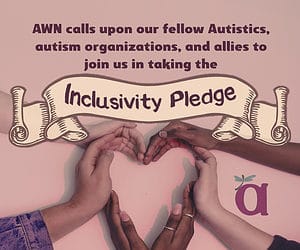 Image description — a photo of people’s hands, in varying skin tones, joining together to form a heart shape. Text says, “AWN calls upon our fellow autistics, autism organizations, and allies to join us in taking the Inclusivity Pledge.” AWN logo in lower right corner.

When Autism Women’s Network (AWN) began our work almost a decade ago we found ourselves enmeshed within a period of discovery. Autistic self-advocates and Activists were gaining traction within the online networking sites. Facebook was fairly new and Twitter had just launched its platform. Autistic people were finding one another with much more ease than had ever been done before. At its inception, AWN represented the perspectives of individuals who were far too frequently ignored or marginalized by much of the greater male-dominated autism community as a result of gender; these and other innovative developments in technology helped to both form and strengthen our collective voice. A new age of activism and self-advocacy was underway and we were all too excited to dive in.

Over the past decade, AWN had to take a long hard look at how we were measuring up to these standards as well. In the early days our leadership was far from diverse and intersectional, especially with regard to race; and although representation is important, the mere existence of additional queer, black, and brown faces around the table is not a substitute for true inclusion. Recognizing our focus required a paradigm shift, AWN has since continued seeking ways to actively include diverse participation and leadership.

So as we set our attention on Acceptance rather than mere Awareness during the month of April, let us join together and hold ourselves accountable for making real change and showing true acceptance. AWN calls upon our fellow Autistics, autism organizations, and allies to join us in taking the Inclusivity Pledge:

I will vigorously seek ways to ensure the activities, projects, speaking engagements, and organizations wherein I participate are intersectional and diverse. I commit to becoming more culturally sensitive. I will amplify the words and the work of individuals and groups from marginalized and underrepresented communities. I will make a concerted effort to increase my knowledge of issues relevant to these communities and to promote the importance of meaningful involvement.