AWN is shocked and filled with sorrow at the slaying of nine African-Americans — six of them women — at a Bible study meeting at Charleston’s Emanuel African Methodist Episcopal Church Wednesday night. A 21-year old white man asked to join the study group and was welcomed with open arms, only to pull out a handgun and open fire, killing eight people immediately and a ninth who died later at the hospital. The killer, Dylann Roof, shot almost everyone present, leaving only one woman untouched so that she could tell the world that he had committed the murders because of his hatred for Black people. Another woman only escaped death while lying in a pool of her son’s blood and pretending to be dead. This is a horrific, racist crime that leaves us angry and reeling.

Autism Women’s Network is committed to defending the rights and lives of all marginalized people. Our mission addresses Autistic women and girls directly, but if we do not show solidarity for the struggles of other oppressed people, we cannot fairly expect others to recognize and support our struggles. We are all connected and harm to one is harm to us all. Therefore, AWN mourns these, our slain brothers and sisters:

The environment of Charleston, South Carolina is a hostile one for African-Americans, with a Confederate flag flying above the capitol building and major streets named after Confederate generals. These symbols of oppression, and so many more daily hostilities, overshadow the lives of the Black citizens who live there, blocking the sunshine of the promise of freedom and equality like storm clouds constantly threatening violence to those who live under them. The offense of a publicly-sanctioned Confederate flag reminds African-Americans daily that they are living in a community that once fought to keep them enslaved and still actively marginalizes Black people today. Singer-songwriter Solange Knowles expressed the anguish of a racist killing embedded in a racist society when she wrote:

AWN feels that no government building has any reason to display a symbol of oppression and calls for the immediate removal of the Confederate flag. 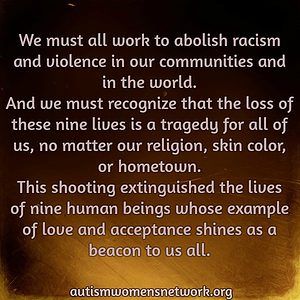 We are shouting for justice. We recognize that there needs to be an ongoing effort on the part of all to help Charleston heal from this despicable mass murder but that healing cannot take place until we first all address the institutionalized racism and the ideology of white supremacy that encouraged Roof to murder innocent people who lovingly welcomed him into their church, a place that is meant to be a sanctuary of peace and kindness. As AWN board member Heather Thomas said:

“There’s a lot of rushing the Black community into healing (and forgiveness) right now, but without some determined move toward seeking justice this healing seems unlikely.”

Therefore, AWN adds our voice to the call for justice in the ongoing effort to help Charleston heal. AWN calls for justice and an end to both the institutional racism at the core of American society and the deadly plague of white supremacy.

Additionally, we are seeing the same “lay-diagnoses” of mental illness in the wake of the shooting that we often see when someone commits such an unthinkable crime. Dylann Roof was not mentally ill; he was filled with vile hatred stemming from his belief in ugly, deadly ideologies of white supremacy. Do not increase the stigma of those living with psychiatric disabilities by indulging in baseless speculation as to the killer’s mental state. Society seeks a scapegoat when horrific crimes occur, but the cause is clearly evident in this case: the killer announced his racist motivations at the scene of the crime. People living with psychiatric disabilities are predominantly the victims of crimes, not the perpetrators and should never have additional stigma added to their struggles by falsely associating their disability with acts of violence. Layering an assumption of mental illness on this mass murder not only endangers the lives of all those who live with psychiatric disabilities, it diminishes the genuine horror of those urges of racist terrorism that did drive the shooter’s actions.

These murders were caused by hatred and cowardice. As the NAACP said in their statement on the Charleston shooting:

“There is no greater coward than a criminal who enters a house of God and slaughters innocent people engaged in the study of scripture.”

But do not think of Dylann Roof as an isolated bearer of anger and death. It is important to remember that the Charleston slayings were simply a more overt manifestation of the same white supremacist violence responsible for the murders of unarmed Black men by police and the trend of murdering transwomen of color, particularly Black transwomen. This mass murder has shocked America but we must not forget that this isn’t really unexpected or inconsistent with U.S. History. It is more of the same devaluing and destruction that has been visited on Black people at the hands of a racist society since before the founding of this nation.

“As a Black Autistic woman living in the American South who is a Christian and attends church, including Wednesday evening services, I am numb and wounded. It could have been my children and I if circumstances were different. It could still be, one day.”

She urges us all to remember that:

“Dylann Roof’s murderous acts of hatred were certainly racist, but they are indicative of a larger problem that exists in society. […] It’s past time for people – NOT just Black people – to call it out. Not only for egregious actions like this, but consistently in our homes, workplaces, schools, social circles, the media, etc. […] Don’t bother to #StandWithCharleston if you won’t stand with us every other day of the year.”

We must all work to abolish racism and violence in our communities and in the world. And we must recognize that the loss of these nine lives is a tragedy for all of us, no matter our religion, skin color, or hometown. This shooting extinguished the lives of nine human beings whose example of love and acceptance shines as a beacon to us all. Though their lives were taken away, may the guiding light they shone forth never be extinguished from our hearts and minds.