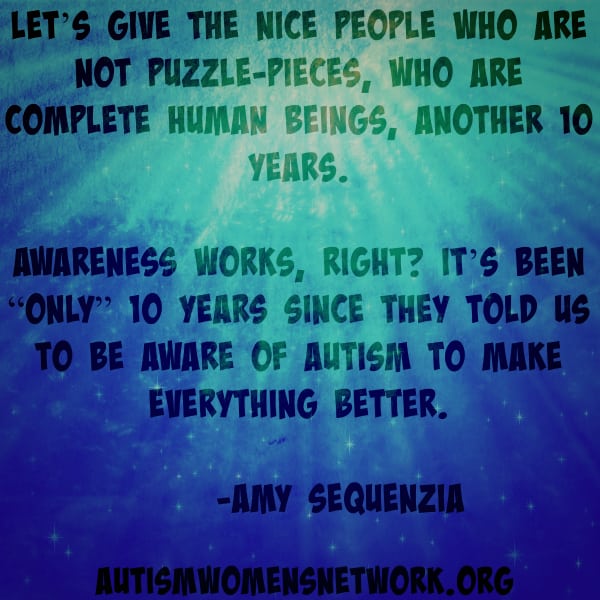 Aren’t celebrities so wonderful? A whole month aware of all those poor struggling families! 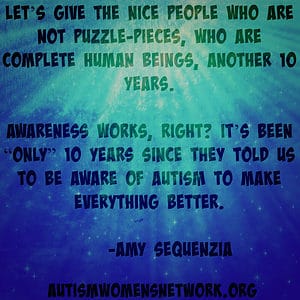 (Image Description) text reads: Let’s give the nice people who are not puzzle-pieces, who are complete human beings, another 10 years. Awareness works, right? It’s been “only” 10 years since they told us to be aware of autism to make everything better. -Amy Sequenzia awnnetwork.org The background is royal blue at the top it appears as if a spotlight is shining down on the text.

You bought the blue lights; maybe you walked in circles with all those teams, mostly full of children “with the autism”. Some of the kids seemed so difficult though! All the temper tantrums, maybe they were the “low-functioning” ones. You wonder why they were not having fun, that awesome loud music, the happy crowd bumping on them, and all that food smelled so good! Poor parents, they have to deal with this every day! You call them heroes. They ARE heroes! You might be one HERO! Is your child like Rainman?

You donated money too. That big organization full of celebrities says that we need more money to find a way to make the lives of “autism families” easier, the families need supports.

Maybe a little voice in your head whispered: this money will not be used to help the families. I think it never really helped mine. And why isn’t the help being directed at Autistic people?

But the voice did not use person-first language, and all those people without autism are saying that the money will help the families, then you got distracted by that “high-functioning” kid “with autism” who is so bright! Maybe he is like Temple Grandin! Do you wish your child were like Temple Grandin too?

You feel good now, and will feel even better when May comes. All the April “awareness” will certainly help those poor families. They will live again. And all the blue lights surely had an impact in the lives of children “with autism”, especially the boys. Blue is for boys after all. The lights are not pink because there aren’t so many girls “with autism”.

What are you saying? Nothing changed for the families, or the children?

What I described is not happening? The supports should have come after you bought all the blue lights! Light It Up Blue all over the world, all the monuments, and the supports did not materialize? But you walk in circles!

But all the awareness! It helps so much!

Now, the schools are more inclusive, right? Being aware of people “with autism”, it is probably easier for the schools to educate them now.

I am sure bullying and abuse also ended. People are “aware” of how difficult to understand, how unsocial people “with autism” are. And how they scream and flappy all the time? It is not like we are asking teachers and peers to “accept” all that weirdness. So, I am sure it is better now and your child will received the best education now that the school districts have been properly “awared”.

And the adults “with autism” are also finding jobs, aren’t they? No?

Not even the ones who look so normal?

But the awareness! Isn’t it what it was supposed to do? Everybody is aware, everything gets better!

I will just whisper this one, it is a delicate matter and I don’t want the “acceptance” people to listen. They will say that acceptance would make it harder for the media to excuse some parents. I am talking about parents who murder their children “with autism”. Awareness will end this, right? And if a parent ever does it again, the media will not say it was the fault of the victim. After all, everyone is so aware of autism now, people “with autism” are so close to be full people! Yes, they are still problematic, I am “aware” of that but sympathize with the murderer is gross! Is it?

How about that big group, with all the experts, parents and grandparents, not to mention the celebrities? They said that awareness is so important! And they know everything; they don’t even let the words of those “high-functioning” adults “with autism” get in the way of the money grab— sorry, fundraiser.

Of course, the “low-functioning” are the ones who really need to be taken care of, I mean, their families need some free time from them. Their voices could be heard, just a little, but they can’t speak, let alone think like real humans, so there is nothing to listen there.

Adults “with autism” don’t have REAL autism. That’s what the great people from the big organizations say. They know because their brains are NORMAL, not broken like brains of people “with the autism”. Except Temple Grandin. Her brain is almost fixed. She is just a little weird.

I know. Let’s give the nice people who are not puzzle-pieces, who are complete human beings, another 10 years.

Awareness works, right? It’s been “only” 10 years since they told us to be aware of autism to make everything better.

Anyway, April is almost over. Then nobody needs to think about this autism thing for another year. Only the big organization with the puzzle piece for the boys (it is blue, remember? Boy = blue). They will keep doing their thing and of course, they need to pay the six-figure salaries of all those nice executives who are so sorry for the “autism families”. They also need to pay the lobbyists who buy– oops, talks to, politicians.