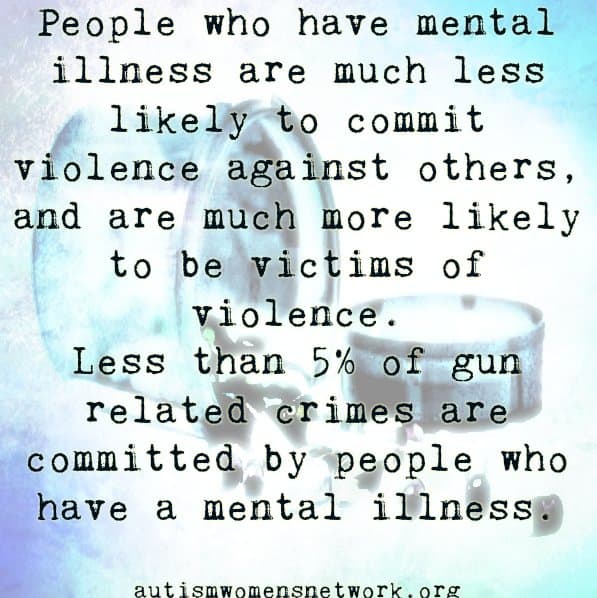 First, I want to say this: I am against gun ownership. I don’t understand the appeal and I think guns should be regulated. 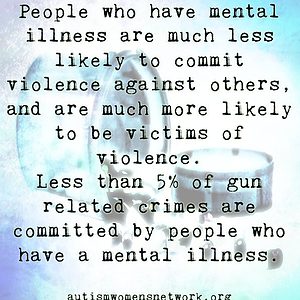 Text reads: People who have mental illness are much less likely to commit violence against others, and are much more likely to be victims of violence. Less than 5% of gun related crimes are committed by people who have a mental illness. (Image description): The background is an outline of an overturned pill bottle with multiple pills of various shapes and colors spilled out with the top laying off to the right side. awnnetwork.org

I am also realistic and know that most people who own guns don’t want to go out and shoot other human beings.

I am very skeptical that the U.S. can ever regulate guns. This is verboten conversation, untouchable subject.

I am afraid I will be disappointed until I die.

But this post is not a crusade against guns (it might seem it is because I want to show how most people “feel” they are right but don’t have all the facts). This post is about the stigma people who have mental illness face every day, and how every time we see or hear about a mass shooting the conversation surrounding the events make the stigma even worse.

To say what I really want to say, I have to make some points. These are based on actual research, so they are facts, not feelings.

We don’t hear about all of them. I believe the media prefers to report when there is mass casualty, or when the shootings happen in middle class/upper middle class areas.

Most of what I see when one of these events is reported is that the shooters MUST have a mental illness.

People who have mental illness are much less likely to commit violence against others, and are much more likely to be victims of violence.

Less than 5% of gun related crimes are committed by people who have a mental illness.

The mental health system in the U.S. is a failure.

When States cut funding for social programs, mental health is one of the most affected – even if it is already underfunded.

There is a wrong assumption, often propagated by the media, that anyone who “really” wants care can get it.

This is privilege. Most people cannot afford to pay for care and have to rely on public health care programs. Many areas don’t have a place where people can go and ask for help. There is already too much stigma and poor people without family or community support face bias and threats like losing custody of their children, losing their jobs, being homeless. – even when they are not a danger to others.

I did some research about a few countries where gun ownership is illegal, or the process to buy one is long and difficult. Gun violence in these countries is much lower than in the U.S.

I talked to friends who live in these countries because I wanted to learn about their mental health programs. Some of these friends had to navigate the system for themselves or for family members/friends.

What I found out is that in each of the countries (Canada, countries in the UK and Australia) there are no mass shootings, or nothing like what we see in the U.S., and that the mental health system is far from good. People who have money can afford care. Most people cannot afford it. The waiting period is sometimes over a year, crises interventions are rarely available, and they are also underfunded.

The proportion of people with mental illness in these countries is about the same as here, only a small percentage of patients receive services and most people don’t have access to any service, not even during crisis (sometimes they don’t seek help because stigma is universal)

But these countries don’t see a spike in gun violence and/or mass shootings.

The only big difference between us and the other three countries is the easy access to guns.

Some people told me that we need to make sure people who have a mental illness should not own a gun, ever. Even if we forget the statistics about gun violence and mental illness, are we going to force-screen everyone?

I was also told that we need to forbid guns only to the “mentally ill who like to blow up people”. People who blow up other people, and mass murderers, are terrorists. They don’t do this because they have a mental illness, which is part of a person’s neurology. They do this because they are haters.

Even if we are only talking about the psychopaths (as someone said to me): I don’t know much about it. What I think I know is that they don’t feel empathy or remorse, they are manipulative, narcissistic and believe that they are better than everyone else. If we, again, forget the facts and the statistics about mental health and violence, it is silly to believe that psychopaths, so self-righteous, would ever think they need help.

Some people who have a mental illness might be evil. They are, after all, people. People can be evil.

I am talking about mental illness but I also include developmental disabilities in the stigmatization. Autism is a developmental disability. Many, many of the recent shooters have been “media-diagnosed” as Autistic. They use code words like “loner”, “acting in a strange way”, “anti-social”. I had friends losing jobs because bosses were afraid of them after they believed in the “media diagnosis”.

Sometimes their families also “diagnose” them after the fact, maybe a self-coping mechanism to distance themselves from the evil, to avoid being blamed (fairly or not) for not seeing the signs, for having raised “monsters”. Or maybe it is because their lawyers tell them to do that.

The consequences on people’s lives are real. A close friend posted this on social media:

“I was told this morning that because I am autistic I lack empathy, have no compassion and therefore could be the next person who goes into a school or movie theater and shoots a bunch of people.”

When we first hear the news, we don’t know if the shooter has a mental illness or if the shooter is Autistic. Why does it take just a few seconds for people to diagnose them as mentally ill? Yes, it is human nature to try to distance ourselves from “them” but I wish we could remember the REAL PEOPLE who DO HAVE a mental illness, and the stigma they already experience.

The shooter in the Charleston church was part of the KKK, a terrorist group. No history of mental illness, as far as I could find.

The shooter of the Oregon school was said to be empathetic, kind to others (not a psychopath). He was also an IRA admirer. IRA was an openly terrorist organization. He did not have a diagnosis of mental illness (his mother is now saying he was Autistic, as we sadly came to expect in these cases)

Saying that MOST of the shooters are mentally ill is a FEELING, not a FACT.

Saying that it is the fault of the mental health system is only partly accurate, because it only makes sense for less than 5% of the gun violence in the country – unless you believe all the school shootings that happened every week this year, and all the mass shootings that happened every day were acts of people who have mental illness. This is not the case, not a fact.

What I hope can happen is the same thing we ask every time a parent of disabled children murders them, and the media, some parents and some organizations blame the lack of services, the “difficult” child, while “understanding” the murderer. Like Autistic activist Zoe Gross said:

“We should talk about supports that families need. We should talk about it when there are cuts. We should talk about it when lack of services makes it difficult for us to work, to go out in the community, to perform ADLs, etc. We should talk about supports and services until our faces turn blue – but NOT in connection to murders. When someone kills their disabled child/children and our response is “this shows that we need more services,” we as a community are taking people with disabilities hostage. The implicit threat is “give us more help or the kids die.” Saying that parents are forced to kill their children by lack of services also de-stigmatizes child murder and excuses the parents’ actions. The truth is that plenty of parents raise children with disabilities under all kinds of circumstances, without killing or abusing them. Service provision is so, so very important but we CANNOT use child killing as a launching platform for advocacy on this issue. It will do more harm than good.”

Please, let’s wait to know who these shooters are. They don’t deserve to be talked about for days. They deserve to be tried, or forgotten into oblivion.

Please, let’s ask for more supports and a better system but not just because mass shootings happen. Facts show that people with mental illness are not the majority of the perpetrators.

← Documentary, SPECTRUM: A Story of the MindAWN Statement on False Claims →