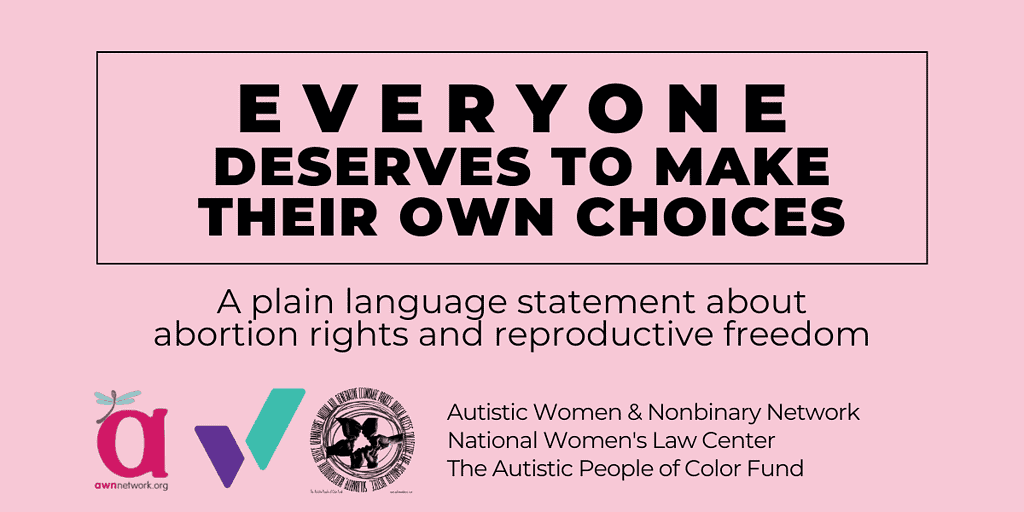 “Let this radicalize you rather than lead you to despair.”
— Mariame Kaba

The Autistic Women & Nonbinary Network (AWN), the Autistic People of Color Fund (APOC), and the National Women’s Law Center (NWLC) believe that all people should have control of their bodies.

AWN and the Fund both advocate for disabled people. We also advocate for LGBTQ people, women and nonbinary people, and people of color.

NWLC advocates for gender justice. NWLC works on issues important in the lives of women and girls. NWLC works in the courts, in public policy, and in our society.

Not everyone has these rights though. Right now…

There are different ways to get an abortion. Some people get abortions by taking pills and some people go to a doctor for a medical procedure. You can learn more about how abortion works in this visual guide. It also explains what the medical procedure is.

There are many reasons that pregnant people need abortions:

But it doesn’t matter why pregnant people get abortions. Everyone should get to make decisions about their body no matter what.

The Supreme Court decision means that abortion rights are different than before. Before, everyone in the country had the right to get an abortion. But it hasn’t been easy for everyone who needs an abortion to get one. Many people live far away from a clinic. Some people don’t have accessible transportation. Some states also made it harder to get an abortion. But everyone had a right to abortion, and that meant states could not always stop people from getting abortions.

Now, the Supreme Court said people do not have the right to abortion. That means every state can make different laws about abortion. Some states already made laws that make abortion a crime and more states are thinking about passsing these kinds of laws.

Here is a list of states with laws against abortion.

The Supreme Court decision also means that the federal government can pass a law across the country making abortion a crime.

We have a lot to say about this!

“The devastating impact of the Supreme Court overturning Roe v. Wade will be felt far beyond the immediate criminalization of people making personal decisions to abortion and bodily autonomy. These life-altering, oppressive decisions are always felt more by the most marginalized people in our communities. Poor people, disabled people, BIPoC, and LGBTQIAP+ people will be the first and most severely impacted.

“Being stripped of these fundamental human rights which Roe protected is only the beginning of what this court plans to do. According to Justice Thomas, he wrote in his supporting opinion that the precedent rulings currently protecting birth control, rights to health privacy, marriage equality, and LGBTQIAP+ relationships  should be reconsidered by the Supreme Court.

“No one in this country is safe. Once a precedent protecting fundamental rights  is taken away, others will follow. It’s only a matter of time, and as this predominantly extremist court has shown, they are actively pursuing a repressive and autocratic agenda.”

“Make no mistake, even before the overturning of Roe v. Wade, disabled people and other marginalized groups already continued to struggle in securing their reproductive rights. Many disabled people are currently, for instance, forcefully sterilized or effectively unable to marry and have children due to outdated and harsh disability benefits laws within the United States. However, the recent dispiriting decision creates even more challenges for vulnerable populations, including disabled, low-income, queer, and racially marginalized people. SCOTUS has left abortion laws in the power of states wihch will result in people’s rights varying tremendously, depending on where within the U.S. they live and whether they have the means to travel to a state where abortion is legal.

“Time and again, SCOTUS, political leaders and others in power have disregarded marginalized people’s identities and our right to exist fully affirmed and protected lives. This decision is a continuation of that pattern. SCOTUS has hidden behind the cloak precedent, ruling that despite Roe v. Wade—which has been the law of the land for 49 years—‘abortion is not deeply rooted in the Nation’s liberty….’ The Autistic Women & Nonbinary Network and the Autistic People of Color Fund will keep fighting for autistic people’s  livelihood, particularly autistic people living with multiple marginalized identities (e.g.,  racially marginalized, women and femme, and LGBTQIAP+ autistic people), recognizing that the various struggles for justice, equity, inclusion, and liberation from oppression are intrinsically linked. Marginalized groups and people—albeit not initially understood, acknowledged or accepted by our Founding Fathers and the Constitution—have every right to live free from threats, harm, or discrimination.

“The overturning of Roe v. Wade’s constitutional right to an abortion  is neither the beginning nor the end to a loss in fundamental human rights. Our country has experienced a wave in anti-trans legislation over the last year and, as a result of this decision,  political pundits and social justice advocates are fearing the worst—that other rights such as the rights to contraception, same-sex relationships and same-sex marriage—are in jeopardy. It is important that, in this moment, we do not accept defeat and that we work together as people who are committed to disability and racial justice and liberation. Autistic people, LGBTQIAP+ people, and racially marginalized people have a long history of being marginalized, oppressed, and denied basic rights but we also continuously work collectively to bring about progress. Be angry today, be dismayed by our loss in reproductive health protections, but let’s work together to build the just society that  we require (that which SCOTUS has made clear it will not itself grant).”

“The Supreme Court’s decision overturning Roe v. Wade and taking away our right to abortion is another harmful decision in a line of decisions that have taken away disabled people’s basic rights to make decisions about their bodies and their future. Recently, we released groundbreaking research showing how laws across the country allow for disabled people to be permanently sterilized against their will. And now the Supreme Court has said states can ban abortion, forcing people, including disabled people, to carry pregnancies against their will. These court decisions and state laws are part of a larger, horrifying system that prevents disabled people from making basic decisions about their lives, their families, and their futures. We have to use our power to fix this.  It won’t be quick or easy, but those of us—the majority in this country—who support freedoms to control our bodies, lives, and futures will succeed in reversing this. In any effort forward to fix this, we must center those who will be the most impacted, including disabled people. Without all of us liberated, none of us are.”

“Ending the federal right to abortion is part of a longer, bigger assault on everyone’s rights and freedoms. When the government controls how people have children, the government is also telling us it wants to control other parts of our lives. Attacking abortion rights is also an attack on all women and all transgender people. It’s an attack on all LGBTQ+ people. It’s an attack on everyone’s ability to have choices about our lives and control over our bodies. And it’s part of a very long history of racism, ableism, and eugenics. Advocates on the front lines have fought for a long time to keep abortion safe, legal, and accessible. We have to keep fighting. And we have to fight to protect all of us, and make sure we leave nobody behind.”

Do you need an abortion?

Here are some things you can do now: