A couple of weeks ago I saw a newspaper article with the headline: “Obama Calls For End To ‘Conversion’ Therapies For Gay And Transgender Youth”.

The President was moved by the suicide of a 17-year old transgender woman. Before she killed herself, she posted a note online, saying that religious “therapists” had tried to convert her to being a boy, the gender assigned to her by society.

President Obama is right. There is no justification for the violence that is trying to impose a sexual identity on someone else. The young woman who died was being forced to comply with other people’s erroneous assumptions about sexual and gender identity.

The article had a deeper meaning for me though. In my head, I changed some words and created a different 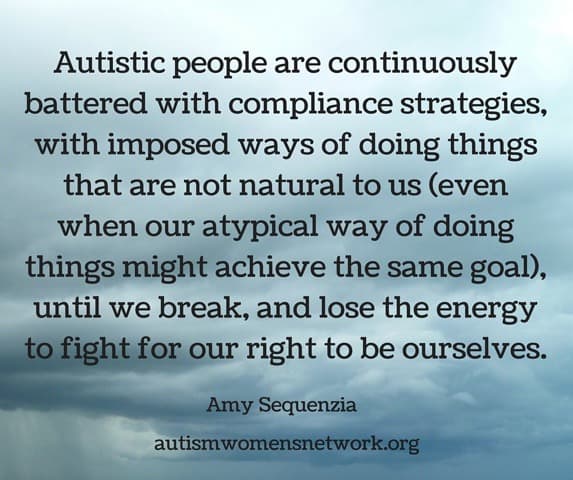 Image text reads: “Autistic people are continuously battered with compliance strategies, with imposed ways of doing things that are not natural to us (even when our atypical way of doing things might achieve the same goal), until we break, and lose the energy to fight for our right to be ourselves.” Amy Sequenzia (Image is a black text on a blue and white background) awnnetwork.org

“I propose that every time we write or talk about ABA, that we also write or say: Autistic Conversion Therapy.

Gay Conversion Therapy has a bad reputation now, even if it still happens.  Both “treatments” (tortures) have the same root.  I want the supporters of ABA to own their objective.  ABA: Autistic Conversion Therapy that uses torturous methods”

They rejected the comparison, conveniently forgetting that Gay Conversion Therapy and ABA have the same “father” – Ivar Lovaas.

(Conversion therapy is sometimes called “reparative” therapy. ABA treats us as if we are broken, as if we need to be repaired)

When reminded of this fact, they claimed that ABA is not “like that” anymore, ignoring that compliance training forces Autistic people to act, react and respond in ways that are unnatural to us, or in ways that we cannot really process, and this is violence. It denies our neurology. It attacks our neurological identity.

Because ABA proponents, as their philosophy dictates, never accept a “no” from Autistics, and will relentless pursue the goal of making us comply with what they believe is the desirable way of being, their next argument was to say that “neurotypical people comply all the time”, that’s why it is vital that Autistics learn compliance too.

Short pause: I noticed that some people went from “ABA is not compliance training” to being compliance “because everyone has to comply too”. Contradictory excuses.

The reason why we “break” is because ABA “therapists” believe they must not allow us to ever do things our own way. They consider our way of doing things so wrong, it can never be allowed to prevail. So they use strategies that feel more and more violent to us, until we, exhausted, comply.

Because ABA does not see us as fully human, we are not allowed self-determination, unless it is not really “self” but compliant with the therapist’s determination to change us.

After all these failed excuses, ABA proponents said that “Autistic people need to learn certain ‘skills’, and to learn how to communicate”.

About communication: everyone communicates and behavior is communication. As a non-speaking Autistic, I can say that you can now understand my writings BECAUSE I wasn’t having ABA when I learned how to type. I need to stim as I type and ABA would make me stop the stimming, therefore preventing my learning.

About skills: it is true that we all need to learn certain social skills. This is not ABA. This is life. ABA rejects non-compliance, which is a social skill. Moreover, all those neurotypical people who insist on high-fiving me, hugging me, and following my face as I turn my eyes to avoid painful eye contact are not being promised gummy bears if they improve their social skills.

Another tired excuse: “my child/my clients ‘looooove’ ABA and they are happy”. Are they, really? A lot of us, Autistic adults, are saying that ABA is bad, that it hurts and that it is violence against who we are. Then parents say that their children are happy. I will wait until the children are allowed to say what they want and how they really feel. They are children, being manipulated through rewards, being taught that pleasing adults makes them “good”.

People who experienced ABA reject it. PARENTS who do NOT experience the violence – but who want to normalize their children – support it.

I wish the President would also see us as people who are just fine being who we are and call for the end of ABA: Autistic Conversion Therapy because it is violence against our neurology, our identity, our humanity.